I have a deep affinity for birds.  They have this way of brightening up even the darkest of days.  Heather and I called our business Birdsong Connections for one element about birds that we both appreciate: their wonderful songs. 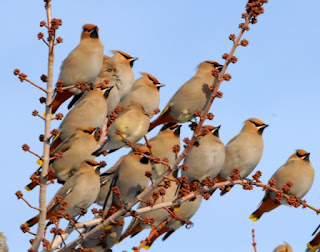 This weekend, there was a bit of a weather shift, and all of a sudden the songs changed, like the dial on nature's radio had moved to a different station.  I went searching for my binoculars and sure enough, the tree was full of Bohemian waxwings. 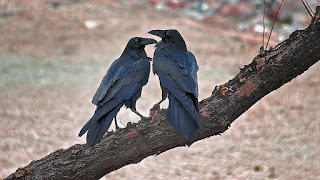 The next morning, there were two ravens uncharacteristically perched on a few of the lower branches next to the studio in the backyard.  They were so close that when they took flight, I could feel the power, and sound, of their wings.  It was awesome.


Yesterday, as I was returning to The Redpoll Centre after lunch, a single raven was hanging out on the back of someone's pickup truck.  He was peacefully sitting there about 20 feet away.  I turned to face him and made my best attempt at making that guttural glug glug sound that raven's make - very different from their regular caw caw calls.

That raven turned to look at me directly, pivoted his head ever so slightly, and answered.

"Glug glug glug," he replied back.

I was over the moon for having had this short conversation in the parking lot at MacDonald Island, just ask my work colleagues at United Way.  I was smiling from ear to ear.

There is something special about connecting with animals, domestic and otherwise.  I felt like that raven and I connected in that brief moment.  What did we say to each other?  I have no idea, but I'm sure it was something very profound and encouraging.
Email Post