"Someone tweeted to me, asking if I was going to paint Winky," I said to Sandy, Winky's owner, when he came by the studio for the surprise presentation of Winky's portrait yesterday.

What's a Winky? I asked, messaging back to @JasonHordichuk, not knowing anything about the Winky Rides phenomenon.

I went looking for the Winky Rides Facebook Page and website after that and then began seeing post after post about this amazing dog who had passed away and his wonderful owner.  My colleague and friend Theresa Wells wrote a beautiful blog tribute called "Winky's Everlasting Ride". Local and provincial media outlets started picking up the story and more questions and requests started coming in asking me to paint Winky's portrait.

I went back and checked.  The first suggestion actually came in on Friday via Twitter. Then the following morning Kelly Melanson reached out.  He wanted to make it happen in the worst way and we hatched a plan to do a surprise presentation in about a month and a half.  Then a second commission request came in, followed by a third, fourth, fifth and sixth.  This was the universe's way of telling me I needed to do the painting immediately.  So, I did.

As those people who follow my process know, I always paint from a black and white image.  This frees me up to imagine all kinds of colours as I start putting down the first few layers of paint: yellow, red, orange, quinacridone green and turquoise.  Bright magenta and yellow green come into the picture along with payne's grey and eventually black.  I work the canvas, allowing the palette and brush strokes to go where they need to go.  I never go into a piece knowing where it is going to take me.  Winky took me on an amazing ride.

The painting was done by Saturday afternoon but Sandy had a house full of company that evening, so Kelly and I planned a rendezvous in Birdsong Studio the following morning.  Sandy had no idea what was happening, though he quickly suspected that a painting of Winky had happened when he stepped in a saw the room full of portraits and colour. 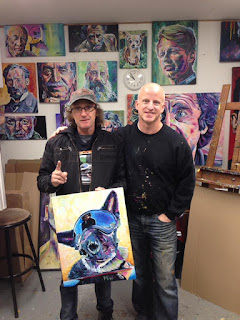 We enjoyed a lovely visit, complete with great Winky stories and a few tears.  Pictures were taken, numbers exchanged and Winky's portrait went home with his dad. 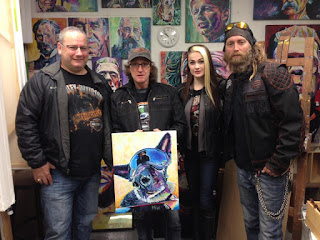 "Winky's Last Ride" (thanks to the generosity of Kelly Melanson for helping to make it happen, and the graciousness of Sandy, who is going to lend it to us) will join my solo exhibition at MacDonald Island Community Art Gallery at the opening reception on December 1st and be shared with the community until the close of that show on January 28th.  It will be an evening not to be missed and everyone is welcome.

Sandy returned to Birdsong Studio a few hours later with a shopping bag full of Winky memorabilia.  He is such a generous soul, a Fort McMurray treasure.

I wanted to grab a selfie with Sandy before he left.  We snapped this one. 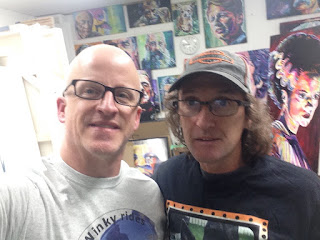 Then I told him a good joke. 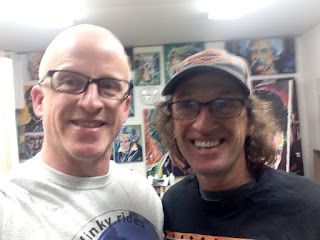 I think seeing Sandy with a smile meant a lot to his friends and fans.

We are working on a plan to make limited edition prints of "Winky's Last Ride" available with 100-percent of the proceeds going to the SPCA.  Stay tuned.  Winky's amazing story is far from over. 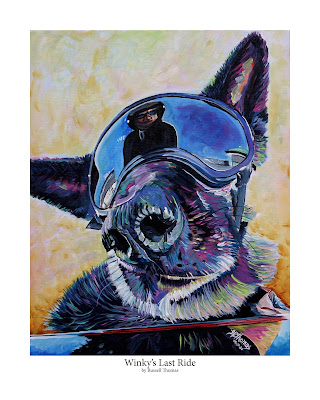