My moment in a movie

A number of weeks ago, I was asked if I would consider playing the role of a street preacher in a film project being shot in Fort McMurray called The Road Behind.  I loosely knew about the movie, as my son Dylan had already performed in a number of scenes, as had several other people that I know.

"Sure," I wrote to producer Mike Mankowski.

Weeks passed, the summer motored on, and I was pretty convinced that they decided not to shoot the preacher's scene.  Last Sunday evening I got a text from Mike asking if I could shoot the scene the following night.

I was expecting one or two short lines, instead, it was a one page preaching monologue.  The note had come in late in the evening (for me) and I had to work the next day, so I spent several hours late the following afternoon and into the early evening doing my best to learn the street sermon.

By the time the call came to go to the shooting location, I felt pretty confident that I had the lines down solid.  However, in the flurry of activity as the crew scurried to get the equipment set up before a storm rolled in,  and as regular people strolled by going to catch the bus, pulling the lines out of my head was easier said than done.

Most actors will be able to relate to the feeling of having learned lines in the quiet and comfort of your room then completely blanking as soon as you were in the rehearsal setting.  Add some new variables, and the brain short circuits.  There is a murky twilight zone as you let go of the script for the first time.

Thankfully, the storm forced a pause in the shooting and I was able to retreat to a bus shelter to further solidify my lines before the crew get set up again.

Acting in film is completely foreign to me.   As I repeated my scene about a dozen times, the camera crew changed positions, changed lenses, and angles.  Preaching at the top my lungs, my voice was starting to get rather raw.

"You'll want to preserve your voice," said Lorne Cardinal, the star of film.  "Keep your intention, but pull back on the intensity.  That'll help."

I appreciated his advice, as my acting voice had not had a workout in at least a couple of years.  It felt abused that night. 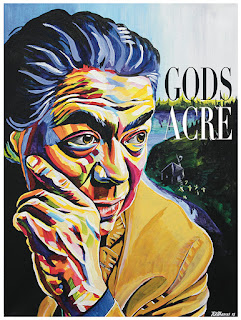 While Lorne and I had not met the last time he was in town shooting Gods Acre, we had connected via Twitter.  I had painted his portrait as a small contribution to that project and had sent it to him as a gift.

"It's hanging up in my office," he said.

I stood up on this thing they called an apple box, belted out my preaching, as a million things I didn't understand happened around me.  Director Kelton Stepanowich seemed to know exactly what he wanted, as did his cinematographer and production team.  I was a tiny cog in that wheel, happy to focus on my preacher's speech and remain completely ignorant of what this was all going to look like when it gets released months down the road. 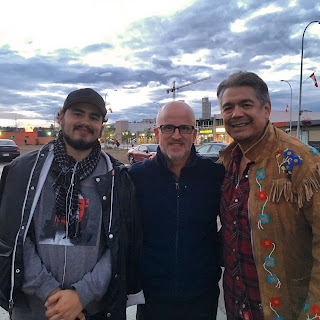 They got the final shot, I said my goodbyes, and walked home.  My moment in a movie had passed.
Email Post