One space or two 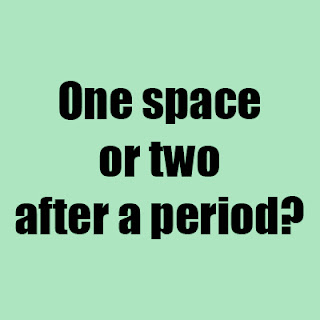 One space or two after a period?

It was a simple question that elicited over 150 answers (which is very strange, because there really are only two ways that this can go).

A colleague of mine was proofing a document for me. Everything looked good to her except the extra space at the end of the sentence. In Sweden, where she is from, it always was only one space.  I learned to type on an old school typewriter, and putting two spaces was drilled into us and backed up with repercussions if we missed one.  So, is it one space or two? What is right? That's when I asked the question on Facebook.

The first bunch that responded were leaning decidedly with two, but answers of two started showing up en masse shortly after. Everyone has a strong opinion either way. Among the people who answered were academics, best-selling authors, professional communicators, business people, lawyers, creative thinkers, and many others.

When you stop and think about it, this is something that we all do, almost every single day. Typing is akin to breathing in this computer and online age. Trying to change a pattern, or coming to terms with a person who has a different pattern than our own, is difficult.

What is the right answer? One or two? I'm sure there are style guides, of this publication or that, that lay out a rule. I'm equally sure that within educational institutions, a preference is given to one or the other. Ultimately, the question of whether to put one or two spaces after a sentence can only be answered by one person: you.

Whatever that answer is, try switching it up for a day and see what happens. I've tried to write this blog post with one space. To be honest, even while consciously thinking about, those two quick taps come out of the dark part of my brain and I have to go back and delete a space. A challenge: try to write something - a short story, blog post or letter - and attempt to do it by using the typing convention opposite to your own. Let me know how it goes.

I believe we all have patterns - both good and bad - that need to challenged from time to time. Moving from two spaces to one, or vice versa, will be a great way to start. Have fun.
Email Post