In the flow state

As I neared completion of a commission piece of two dogs on Saturday morning, I reflected on the suggestion made by a potential client early that day.  "Would you consider painting Tupac", she wrote.

"Tupac?"  I said to myself, trying to picture him in my mind.  While I don't mind the odd rap song, l am not even close to being a fan. 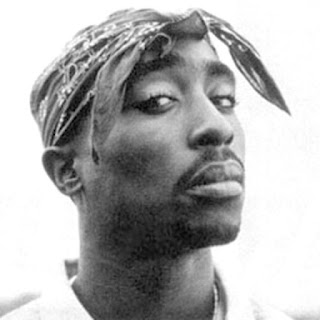 I did a Google image search, looked at all the various shots of the former rap icon, and found one that really spoke to me.  It kept speaking to me as I painted the dogs, so much so that it was clear and compelling that I had to do him next, as a ME project - something to shake me loose a little.

When I do something for the creative pleasure of it, the first step is always to choose the canvas size.  As my fingers walks along the edges of the various sizes that I had in stock, they stopped on the largest square size:  36" x 36".  I have only done a handful of paintings that large, and certainly never a single face that big.

The afternoon of painting Tupac was a bit of a blur, as allowed the brush and colours to take me where they wanted to go.  The result was something striking and different.  By the time I broke for dinner, it was pretty much done.  All I needed to do was add the bandana and do the finishing flourishes. 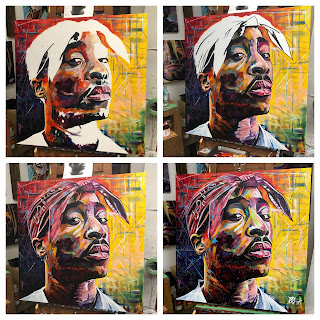 I was out of my head as I was painting this one.  Rather, I was in my heart, respond to the minute cues that the universe was giving me as to colour choices, textures, lines and splatters.  I have no recollection of the brushes that I used or how I even began.  All I remember is that as I was nearing the end I was super wired and super tired.  It was lovely.