It had been a tough week.  Coming back from our long weekend family reunion at Island Lake, near Athabasca, my work schedule was packed, the weather was extraordinarily hot, and my get up and go had got up and went.  To cap the week off, I got one of those phone calls you dread.  A dear colleague and friend had been tragically killed in a pedestrian collision.

I'm sitting here typing the words and even picturing the scene, but it still hasn't descended from my head to my heart.  It doesn't seem real or even possible.  I keep having moments of wondering if I have made it up in my mind.  Sadly, it's all too real.

This was also the week of our United Way campaign kick off breakfast and press conference.  I realized that this important event was causing massive tension in my body by the headache that developed mid-week and didn't let go until the event was over.  I was also inexplicably on edge as we returned to the office after the early morning celebration at the Golden Years Society.  It took a lunch time nap to return to a sense of balance and calm. 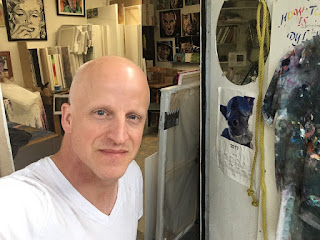 As I went into the studio on Friday afternoon and worked on a large commission that I had been doing in drips and drabs throughout the week, in stolen moments of free time, I realized why I had been feeling a little off.  It was September 8th and I hadn't produced a finished painting in over a week.  I honestly can't remember the last time that happened.  The long weekend away with family combined with a crazy work week and higher level of exhaustion than normal combined to minimize the number of hours I was able to spend in Birdsong Studio.

As the hours drifted by and I went in and out of the studio working on the commission, doing house chores, and feeding my neighbourhood squirrel, I felt like I was coming back into myself.  We found out that country singer, the "Gentle Giant", Don Williams had passed away earlier that day.

I had made very good progress on the commission piece, so I took the evening to sketch out and put the first layer of paint down on a tribute portrait of this music legend. 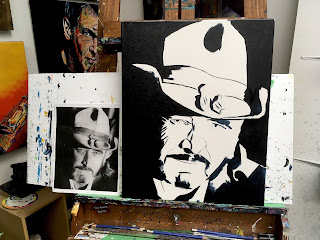 I got up on Saturday morning and spent the morning finishing up the portrait, going in and out of the house, doing cleaning and laundry and that kind of thing, relishing every refreshing moment. 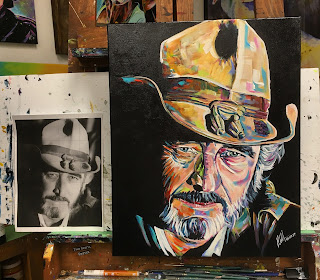 I really didn't realize how important my studio time has become in my self-care process.  The drawing, painting, packaging, and organizing that go along with my artist's life have become the passions that fuel my soul, or the release valves that keep the stress bucket from overflowing.  The experience of the week and the feeling of completeness I had being back in the studio affirm our decision that we've made to semi-retire and fully explore the possibilities of an artist's life.