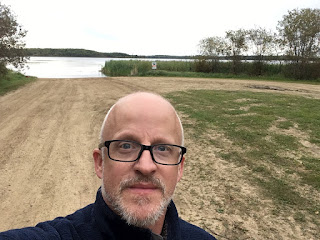 When I set out for my solo fishing excursion alone in the canoe, it looked like an absolutely lovely day on the lake.  There were a few small waves out in the centre and large areas of calm glassy conditions near the shore.  In fact, it looked like an ideal day for a quick paddle and what promised to be an exciting couple of hours of catching northern pike.  The previous two days had been very productive; to that point I had caught and released upwards of 20 fish.

I placed myself in the stern after pushing myself out far enough so that my paddling could take over.  Steering a canoe on your own is a little challenging, but nothing that caused me any concern.  My intention was to fish off the shore just a few hundred metres from the boat launch.  Staying close to home seemed like a smart idea, even with what appeared to be a perfect day.

A couple of casts in, watching the five of diamonds (my fishing lure that pike love) make its way back to the boat, I couldn't help but notice that the weeds underneath the water were moving by at a rather fast speed.  I glanced forward and noticed that my thought about staying several hundred metres from the boat launch had been quashed.

I picked up the paddle and darted for the reedy shore, hoping to lodge the canoe in the vegetation so I could cast out into the four or five feet of water.  While it stayed put for a moment or two, very quickly it broke loose and made its way to the large chunk of seaweed, or "salad", as we called it, that I was fighting to bring in way off in the distance.

Over the last two days, all of us had caught fish that dived down into the weeds.  By the time we reeled in the weighty package near the boat, we were often convinced that we didn't have a fish at all, just a green stringy blob of lake salad.  More often than not, as we tossed the weeds aside, we would reveal a nice fish buried underneath.

By the time I had free my hook from the clutches of the weeds - there was no fish underneath this time - I looked up and saw that the wind had taken me beyond the little cove and out into open water.  I immediately grabbed my paddle and tried to maneuver the boat back to the shelter of the reeds.  However, something had changed.  I sensed right away that fishing was futile and that I needed to get back to the boat launch before I got blown too far off course.

At first, I tried to force the canoe back in the direction of the shore, hoping to follow it all the way home.  When that proved impossible, I swung the bow around and tried to line it up with the boat launch off in the distance.  I could get almost there, but the wind kept knocking me back in the opposite direction.  My goal was to head west, but the cross wind was coming from the north. With each passing minute I found myself drifting further and further out into the middle of the lake.

A few more futile attempts and I realized that the wind was not going to give me any forgiveness.  Trying to twist the boat into a westerly direction, the wind kept forcing me south.  Off in the distance I saw a pontoon boat - a family was out trolling on this beautiful Sunday.  I made a decision right then and there that my only chance was to ask for help and request a tow.

"Hey!" I yelled as they passed by about 75 metres ahead.

I waved my paddle.  They waved back, probably not sure if I was giving an over enthusiastic greeting or if I was in trouble.  A second wave of the paddle got the message across.

They brought in their lines, swung around, and asked how they could help.  They tied up my line to a cleat on the stern and slowly brought me back to the boat launch, the two guys in the boat smiling with amusement, the two little kids looking on with curiosity.

I was a little panicked, knowing that if I had continued struggling, I could have ended up on the opposite and uninhabited side of the lake.  I knew my life wasn't in danger; I was wearing a life jacket and getting to a shore was not going to be a problem.  The problem would have been getting back from the shore.

In the end, I learned some valuable lessons.  I will think twice before going canoeing alone in the future.  Having a partner makes all the difference in the world in terms of keeping the boat low in the water and having enough force to cut through the wind.  However, if I'm ever alone in a canoe and something similar happens, I know now to move to the centre of the boat and paddle from there.  Having the weight in the middle would help the bow stay lower in the water, as opposed to acting like a sail with me sitting in the stern.

It is humbling to discover the power of nature.  That was an average beautiful day on the lake, yet I found myself in an untenable situation that required human intervention.  I can't image what the same experience would have been like in real windy conditions.
Email Post