Over the last couple of days, I have done a series of abstract paintings.  I haven't been doing them exclusively, rather in the gaps while working on various commission projects.  Abstract painting has been my Achilles heal in this journey, a type of creation that has seemed beyond my reach.  I've watched Heather create her magical abstract paintings and have been awed by her natural ability.

At the beginning of the week, we spent some time in the studio with my cousin and his wife.  They have been on an artistic journey of their own and had brought a lot of pieces and processes to share.  My cousin has the gift of being able to verbally express what he's learned and the theory behind what makes great art.  I was a sponge. Words like "negative space", "dissonance", "primary focus" and "contrast" washed over me.

The work that has been done this week is directly influenced by his words, their work, and the abstract ideas that Heather has been exploring for the past several years. 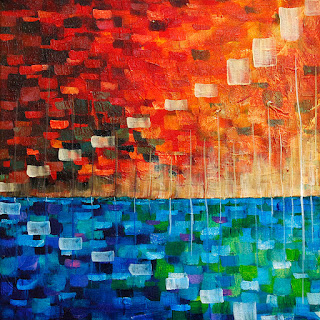 This painting began as a rather typical fashion, using my standard colours and composition.  At least that was the case before I decided to try a couple of glazing techniques that my cousin talked about.  This was the result.  It is a richly textured piece that is reminiscent of the sea at dawn or dusk. 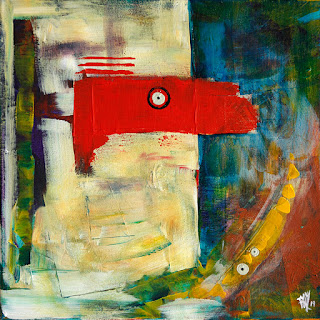 This was an unfinished project that had been left behind after a workshop.  I decided to repurpose the canvas by laying down a number of colours and textures.  Once that dried I did a few more things, scuffed up a few sections with some tools, and let it sit to dry.  The third pass resulted in this composition.  To me, it speaks of farming, love of the land, hard work and the interchange with nature.  The yellow arch swinging up from the bottom makes me think of the scythe that my ancestors used to cut down the grain over one hundred years ago. 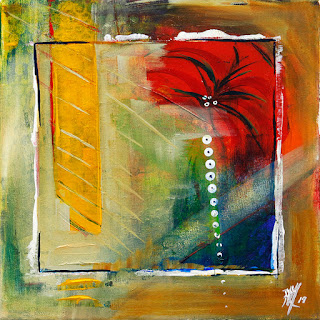 Following the same path as "Scythe", I threw down paint on another unfinished canvas.  This process - it needs to be said - involves absolutely no thinking.  Rather, I respond intuitively to what the colours and textures tell me and keep adding and subtracting until it feels complete.  I'm sure one could explain, in an intellectual fashion, the elements that help or hinder the piece.  However, for me, it's a series of choices made without thought. 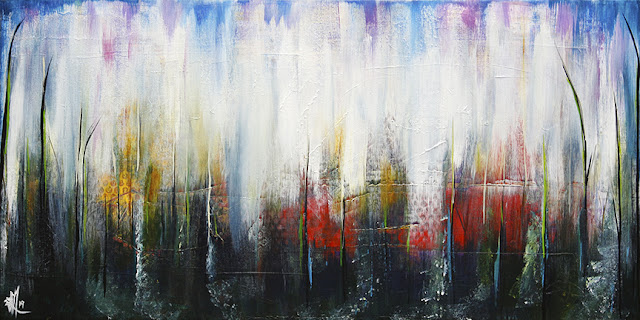 There are a number of canvases in the studio that are fully completed projects that never got picked up.  This was one of them.  Like the previous few abstract paintings, I slapped down some colours and moved them around into various patterns and shapes.  Once that layer dried, I did a few more things that created what I would describe as a "big hot mess".  At that point, I took a break for lunch and a nap.  In my state of being half awake and half asleep, I saw what I needed to do with the project.  It's fascinating the range of things that people see in this piece:  forest, boats, a city, fire, northern lights.
Email Post