Writing about painting during a pandemic is something that I never thought I'd be doing.  However, for the sake of posterity, it is probably important that I do.

On March 1st, the number of corona virus infections in the United States was less than a hundred.  By the end of March, that number had eclipsed 200,000.  In that same time period I created 33 new paintings, of which, only four remain in the studio.  The rest are scattered across the country. 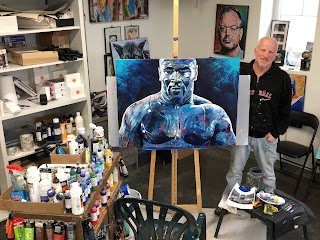 The intense stress and anxiety I felt when the panic buying and social distancing measures began has long since passed.  What has kept me balanced is a daily routine that is pretty much the same as pre-pandemic.  I get out to the studio by 6:30 or 7 am and start working.  What I do varies, but I'm intentional about moving forward and creating new work every single day. 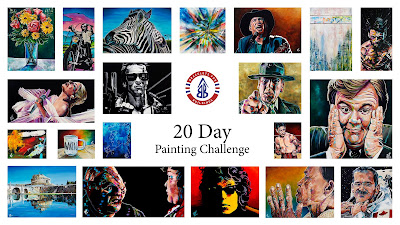 I was fortunate to have the 20 Day Painting Challenge to keep me busy through the month.  Even in the midst of a global crisis we were able to fundraise enough money to build another house for a poor family in Cambodia with Bracelets For Buildings.  Doing something for others lifted spirits here in the studio and out there in the world, as people followed along.  And while I'm not completely caught up yet, I was able to get a number of commissions out the door in March.

April will be more of the same as the quarantine is likely to continue for weeks, if not months.  Some suggest that it could be July or August before things return to a new normal.  I say "new" normal, as it is likely that we may go in and out of quarantine a number of times before the Covid-19 pandemic is declared over.

I'm grateful that our suppliers are still in business.  We are well stocked with essential supplies: canvas, paints, cardboard (for making shipping boxes), bubble wrap (for packaging), tape, hanging hardware, gallery canvas prints, puzzles, etc.  I'm grateful that Canada Post is still operating, as most of our sales are from people who are unable to pick up at Birdsong Studio.  Walking to the post office is the one outside activity I get to do almost every day. 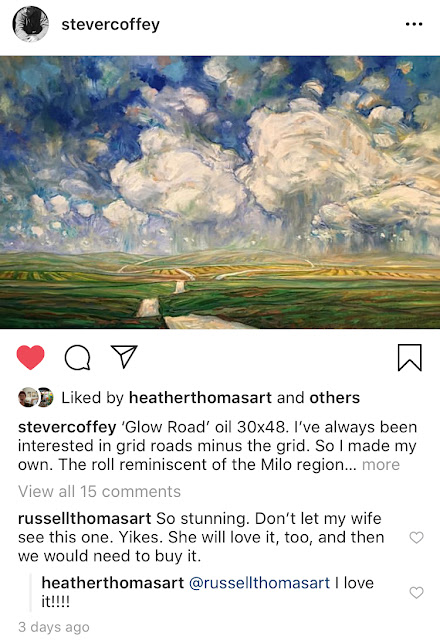 While Heather and I have been painting up a storm, we paused the other day to realize a dream.  We have had the intention for a couple of years to find a painting by Steve R. Coffey that we both love.  Steve posted one on March 31st.  We went to a gallery in Calgary on April 1st and bought it.  "Glow Road", 30 x 48, now sits above our fireplace.

Through this whole thing I've been listening to the news, updates from the province and the federal government, looking at the stats from Johns Hopkins, and listening to daily podcast like Morning Joe, The Rachel Maddow Show, and Rumble with Michael Moore.

I've also been listening to a new song, recently released by 78 year old Bob Dylan.  Inspired by recent events, and feeling that he had something in the can that spoke to the times, he released "Murder Most Foul" on Sunday.  It is his longest song, clocking in at almost 17 minutes.  I've probably listened to it a dozen times in the last few days.  I'm listening to it right now.

The sad truth is that the pandemic is just beginning to pick up steam.  It will continue exploding in the next 4 to 5 weeks in Canada and the United States.

"It is what it is," sings Bob Dylan...."The soul of a nation is torn away.  And it's beginning to go into a slow decay.  And that it is 36 hours past judgement day."

Take care my friends.  Be diligent.  Be brave.  We will get through this, together.
Email Post