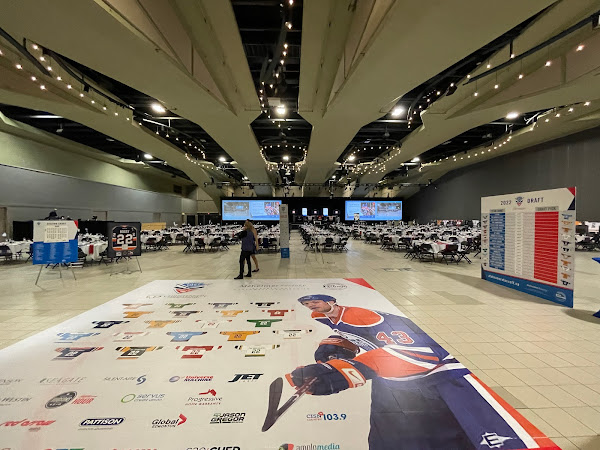 It has been over two years since I was in front of a large audience doing a live painting for charity. The last one was the Sedin brothers in Vancouver, just before the start of the pandemic in early 2020. I was nervous approaching this one at the Edmonton Convention Centre in support of the Alzheimer Society of Northern Alberta and NWT. 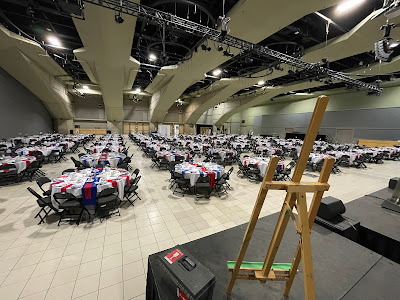 I typically arrive at the venue super early, just to get a lay of the land. I made several trips from the hotel to Hall A of the convention centre carrying my gear.  It always calms me down to have my paints, brushes, easel and canvas on the stage and ready to go.

The first few hours are always slow, as more crew and volunteers arrive to finish the set up and make final preparations for the arrival of some 700 guests, expected around 11:30 am. I started laying down some paint shortly after 9 am, knowing that I had a limited amount of time before they were scheduled to auction off the painting. The first hour of painting happened in very little light, as the stage lights hadn't been turned on yet.

I started with the background then set to work on the jersey.  Having the familiar colours of the Edmonton Oilers done and ready for the arrival of guests is always a great strategy.  I also had to get the ice done, because I knew that was where Kevin Lowe was going to sign his autograph.  Ensuring that the signing spot was one hundred percent dry was top-of-mind.  When people started arriving I turned my attention to Kevin's face and hands before jumping up to the Stanley Cup, an equally important subject in the painting. 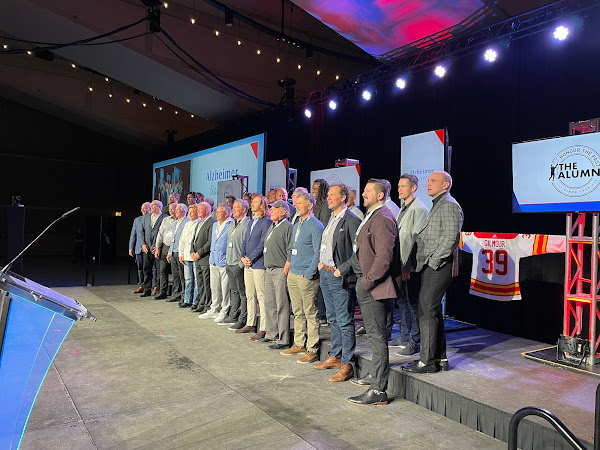 It is a tradition at this event to have all the NHL alums come to the stage for a group photo. I wonder how many you might be able to name in this picture?

The highlight of the luncheon was a hot stove conversation hosted by Jason Gregor of TSN. In the hot seats were my subject, Kevin Lowe, and Doug Gilmour.  I actually love this part of the program as I got to absorb some wonderful stories while doing the final touches on the painting. They were going to auction the painting off right at the end of the hot stove. 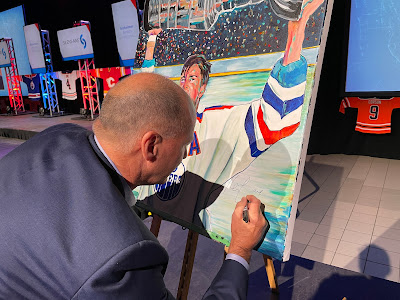 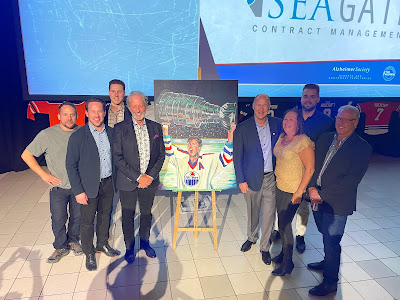 The painting was purchased by the team at Seagate Contract Management. It will be delivered to their offices next week after some final touches back in the studio.

Luncheon guests and several NHL alums like Craig McTavish and Doug Gilmour, were very complimentary, impressed with the painting. I'm very happy with it and look forward to touching up a few things before sending it on to its final destination at Seagate Contract Management. 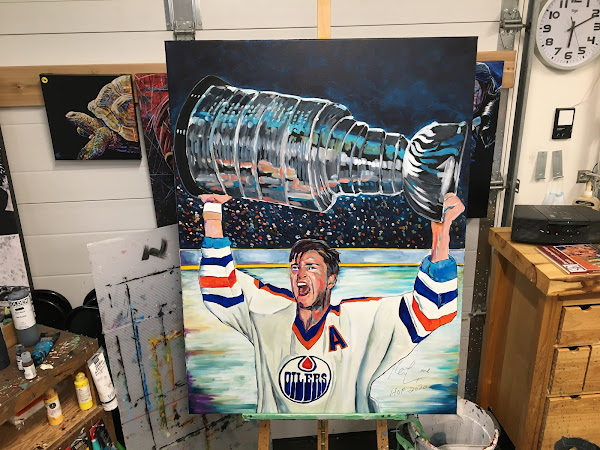 Next on the live painting agenda is Mark Messier, the keynote guest for a similar event in Calgary in May in support of the Gordie Howe C.A.R.E.S. organization.
Email Post