The Book of Negroes 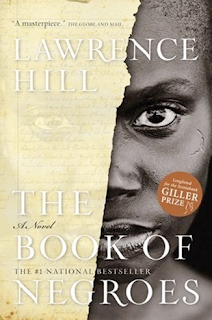 I don't know what possessed Lawrence Hill to research and write The Book of Negroes? I'm sure if I plugged in the right search terms in Google I could find the answer. Or, perhaps I could reread his introduction in the illustrated version of the award winning novel that has moved millions. Regardless of why he wrote it, I'm glad he did, just like I'm glad his brother Dan wrote "Sometimes When We Touch" all those years ago. Did you know they were brothers?
The Book of Negroes chronicles the imaginary life of Aminata Diallo who was kidnapped from her home in Bayo, Africa as an 11 year-old child and marched to Bance Island where she was swept away in the thriving slave trade of the eighteenth century.
Trying to imagine the months long voyage across the Atlantic aboard the cramped and inhumane slave vessels is truly unimaginable. But through his evocative use of language the sights, sounds, smells, physical sensations and sheer horror comes alive.
From her first years in the New World on St. Helena's Island, slaving at the indigo trade--the precious substance used to dye clothes, to her time in Charles Town "catching babies" and plying the books of Solomon Lindo, the official inspector of indigo for the Province of South Carolina, she persevered.
The story tracks the modern world's slow but steady move toward the abolishment of the slave trade by the British Parliament in 1807 and by the United States Congress in 1808. Slavery itself took a little longer to get rid of, being outlawed in Canada and the United Kingdom in 1834, and thirty-one years later in the US with the passing of the Thirteenth Amendment to the Constitution.
The Book of Negroes is the largest single document about black people in North America up until the end of the eighteenth century. In it are the names of 3,000 black men, women and children, who, after supporting the British during the Revolutionary War, were granted passage from New York City to British colonies and the promise of a better life. Most of the people in the book found homes in Nova Scotia, in communities like Birchtown, Shelburne, Port Mouton, Annapolis and others.
This is a work of fiction, but this is their story, their chance to be remembered and honoured for their unfathomable capacity for survival.
April 20, 2010 - 192.4 pounds, 28.2% body fat
Email Post