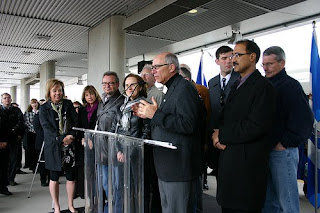 While Claude and I were attending Theatre Alberta meetings in Calgary, Ben was enjoying his first independent weekend away from home with Mama or Papa. We dropped him off at Uncle Michael and Auntie Kathryn's in Edmonton on our way south. It turns out he had a wonderful time.
We arrived a little earlier than expected this morning, meetings complete, ready to be home. Ben had heard all the scuttlebutt about the opening of a new South LRT station the day before and had expressed a strong desire to go for a ride. So, early on Sunday morning they hopped on the LRT and went from one end to the other, $2.75 all-in.
"Tell them how far it was," prompted Michael.
"Thirty-seven kilometres," Ben answered hesitantly.
"And how long did it take?" asked Michael.
"Twenty-eight minutes, both ways," said Ben.
What a great Sunday morning activity for an uncle and his nephew! A great memory at a great price.
April 25, 2010 - weight and body fat% n/a
Email Post