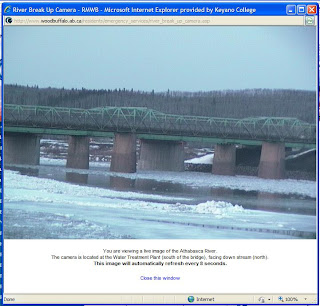 I missed it completely this year. Normally, I'm hyper aware of when the Athabasca River may or may not break up, that point in the season when the ice flow pushes through town on its way to the Delta and beyond into Lake Athabasca. It fizzled away about two hours ago, days ahead of when I thought it would go. I saw a posting on Facebook, then went to the Regional Muncipality of Wood Buffalo website where they have a webcam view of the river, from just south of the bridges.
On average the big river breaks up around April 19th or 2oth. But this spring has been extraordinarily odd. First, we had two weeks of short sleeve weather at the end of February that not only obliterated what little snow we had, it significantly reduced the ice levels on the river systems. Then it got cold again, then warm, then cold, then BAM! -- three feet of wet heavy snow.
That incredible amount of moisture followed by warm weather and lots of sunshine acted as a lubricant, coaxing the frozen river crust on its merry way and ushering in another blessed fishing season.
April 15, 2010 - 190 pounds, 29.5% body fat
Email Post