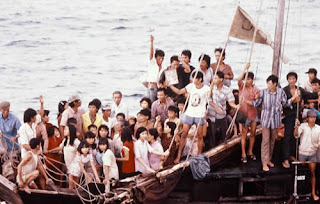 If you grew up in the 1970's, the term "Boat People" might mean something to you. If you are of the younger set, you might twist up your eye brows when one of us Gen Xers mentions the term. Memories of the Vietnamese Boat People came into my mind today while playing my first game of badminton in well over twenty years. I'll make the connection between the game and the people in a moment.
"Boat People" is a generic terms for those who leave their country by boat to seek asylum from persecution, usually on junky crafts, unsafe and often unseaworthy. In the late 1970's and well into the 1980's over one million resident of Indochina (Vietnam, Laos, Cambodia) fled by water to escape the communist swell in that part of the world. Several ended up in my hometown of Kamsack, Saskatchewan, and they were awesome badminton players.
Every Friday night we would walk over to the KCI gym, a short half block walk from our house, in our Adidas sweat pants, carting rackets made by companies like Black Knight, Wilson and Yonex. The game was so popular back then that the courts would be filled, often with players sitting on the sidelines waiting for their turns. We would play for hours, often doubling over with exhaustion from the competitive matches.
Getting a chance to play one of the Boat People was something special. One of the guys worked at the local grocery store, his name is sitting there, somewhere in the back of my brain, refusing to reveal itself. But he was an incredible talent on the court, lightening fast, instinctive, and tireless. At the height of my game, probably in grade ten or eleven, I gave him a run for his money. I think I won the match, but I'm pretty sure I almost killed myself doing it.
Our tradition was to play until 11 pm, at which time we'd walk home and watch the latest episode of SCTV, back when it had migrated from Edmonton to Toronto and was one of the hottest shows on television. Artists like John Candy, Eugene Levy, Andrea Martin, Rick Moranis and Dave Thomas were about to explode as some of the most successful comic actors in the business.
That was the early 1980's. I joined some of my staff on the court today and had a blast reliving a glorious period in my life when I was actually good at a sport. It was also nice to remember those incredible players who had crossed the ocean at their peril in hopes of a better life on the Saskatchewan prairie.
April 21, 2010 - 193 pounds, 28% body fat
Email Post