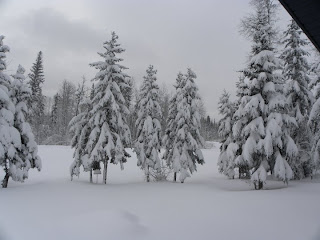 While we were flying across North America en route from Cancun to Edmonton, a gargantuan spring snowstorm hit Wood Buffalo. By the time we landed and got settled into our hotel, the winds were slamming up against the windows, causing an eerie whine, but no snow. We knew what was happening back home thanks to a flurry of comments on the social media sites like Facebook and Twitter. Thanks to the advice of many, we opted to layover an extra day in the big city, waiting for the storm to pass.
We headed north this morning, enjoying a sunny sky and perfect conditions up until Boyle, at which point there was a massive cloud bank and the beginning signs of the storm lurking off in the distance. Conditions got worse and worse the closer we got to home, rough patches in abundance from Grassland to Mariana Lake and completely snow covered for the final stretch.
The boughs of the trees were hanging heavy with the incredible weight of what must have been a perfect storm. The ditches were piled high with sculpted drifts and the remnants of more than one errant vehicle that ventured into their clutches.
Turning off of Fraser on to Demers, the force of the storm came fast into perspective, with the graders having cleared a path just to allow some movement of vehicles. Our driveway was completely blocked with heavy immovable chunks of ice laden snow. The roof was blanketed in about 30 centimetres of snow, the steps up to the house virtually impassable.
Arriving for the aftermath, it's hard to fathom what transpired over the past 48 hours. We're grateful to have arrived safe and sound, even if we got home a full day later than expected.
April 11, 2010 - weight and body fat% available...but I shall wait until morning for the weigh-in
Email Post