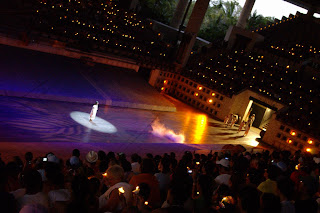 Xcaret is a short ten minute taxi ride from downtown Playa del Carmen, the site of a Maya civilization archaelogical site and a massive eco-tourism attraction. We spent the whole day there yesterday, exploring ancient ruins, floating down an underground river, adoring a bale of gargantuan sea turtles and a pod of dolphins, and battling the heat of a typical Mayan Riviera day.
I believe, although I'm not 100% sure, that this was the place highly recommended by Angele up in the Keyano Foundation office before we left on this trip. She described an incredible attraction capped off by an evening performance that is out of this world. Based on what we got to experience last night, I'm thinking we went to the right place.
As the sun begins to set at Xcaret, visitors and staff from around the 200 acre park begin streaming towards the Teatro Grand Tlacho, an imposing structure that dominates the skyline with covered open air seating for over six thousand visitors. And while we had heard there were only four thousand in the park that day, we didn't want to take a chance on getting crappy seats, so we made our way into the venue 45 minutes ahead of the scheduled start time.
The pathways, wide and cobbled, curl around the structure, lined with ancient Mayan characters, played by actors in full costume, bodies adorned with intricate ancient designs and astounding make-up. Sizzling day had turned into lurking dark as fire lit torches illuminated the path.
We picked out seats, strategically near the exit, about half way up the long side of the arena style theatre. If Dylan needed to use the washroom during the show, the last thing I wanted to do was to have to crawl over people in the dark. It was the perfect spot, just to the left of a giant waterfall, a seemingly natural wonder that had been worked into the final design of the space.
"I wonder if that's real?" I asked Dylan, pointing to the waterfall. "Or, do you think they'll flip a switch and shut it off when the show starts?"
"I don't know," he said. "We'll just have to wait and see."
The lights dimmed and a performer appeared to my left, flooded in a blue light, rocking an incense holder back and forth, I assume blessing the performance and the story about to be told.
What followed was a history of Mexico told through music, song, dance and sport. The boys particularly liked the Mesoamerican ball game where two teams faced off against each other attempting to get a large hard rubber ball into one of two hoops, affixed perpendicular to the side walls of the playing field, at the top of a raked slope. They had to move the ball about using only their hips. I can't seem to find the historical background of the Mayan fireball game they played, but it really resembled hockey. Two teams outfitted with what looked to be hockey sticks, battled to get a flaming ball into the opposing team's net. Incredible!
The performance artfully captured the rich history of Mexico, from the arrival of indiginous peoples from the north to the development of rich Aztec and Mayan cultures, from the arrival of the Spaniards in the 16th Century to Mexican independance and eventual war with the United States.
The entire company had to number in the hundreds, with performers appearing all over the massive theatre, and filling the arena below. The music, the singing, the games, all happened in front of our eyes, creating a spectular presentation.
There was a moment that stood out for me, when the hairs stood up on the back of my neck, as a lone Spanish mandolin player slowly walked out on the empty field playing this hauntingly beautiful ballad. An indigineous flute player joined him, providing this lush harmony and a gorgeous song, symbolizing two disperate peoples who came together to create a country that now has the largest population of Spanish speaking people in the world, and the largest population of Native American language speakers on the continent.
Xcaret is an amazing ecopark, with great attractions and activities, but coming here and missing the closing spectacular would just be a sin. It was unforgettable. And for the record, I looked to my left halfway through the first act, and realized that the waterfall had, in fact, been turned off so as to not disturb the show.
April 6, 2010 - weight and body fat% n/a
Email Post