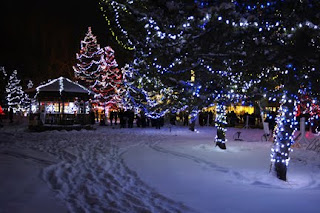 There was a time, not that long ago, when Christmas Eve felt still and somewhat isolated as the world around us scattered throughout the province, country and world. Looking through Facebook and Twitter I can instantly picture clearly and with certainty, friends and colleagues in locations as far flung as Taiwan and as close as down the block. What is John Smith doing this Christmas? Wait a minute, let me go check and I'll tell you. 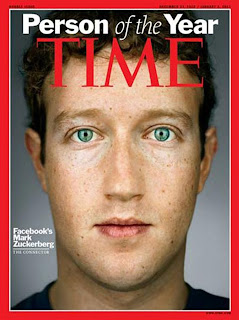 TIME named Facebook founder Mark Zuckerberg Person of the Year, for good reason. He and his team have radically influenced the way we communicate. We share, post, tweet, retweet, like, unlike, connect and reconnect by the billions, engaging in an activity that was unfathomable just five years ago. So now, depending on the number of connections you have, you are able to post a holiday greeting that instantly scatters the globe and reaches a set of people who would have largely remained absent from your life in the "old days". Think about it. Go through your friend list and ask yourself how many miracle connections are there. How many of these people would I have likely never connected with in the days before social media?
I sent out our annual Holiday Hello electronically this year. I loaded the pdf of the newsletter to my website and sent the link far and wide. I posted and reposted on Facebook and sent the link via Twitter. With due apologies to Canada Post, I embraced the future and resisted the urge to hold on to the past. It was hard. In the end, I printed a few hard copies just to assuage my discomfort.

On Christmas Day we will try our first video chat with Heather's brother and his family. I know Skype technology has been around for a number of years, but I'm trying it for the first time. In many ways we take it for granted, but if you told me when I was a young adult that we'd be able to make free video calls to anywhere in the world, I would have laughed in your face. Stuff of science fiction has become the norm.
My 7 year old son Ben just woke up. He always comes in my study, wrapped in his fuzzy green blanket, to get his morning hug before he goes off to run his virtual restaurant on his iTouch. When I was 7 years old I would definitely wrap myself up, but I'd be huddled up against the furnace vent starring at the Christmas tree, the black and white television sitting silent across the living room in 1974. My father at the same age would have been wrapped up too, stoking the fire in the stove that would have blown out in the middle of the night, electricity and forced-air heating the stuff of dreams out on the farm in 1942.
Look where we are; imagine where we'll be. Technology changes but the sentiment of Christmas remains the same, that you and yours enjoy time together free of the cares and concerns that envelop us throughout the year. Thanks for reading; I'm glad you do.
Email Post