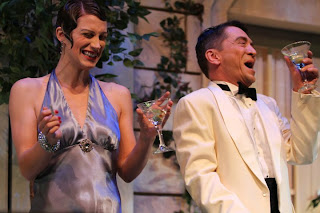 We went to go see Keyano Theatre Company's production of Noel Coward's Private Lives on Saturday. A play that peels back the fourth wall and allows us to get a very personal (and hysterical) look into the lives of star-crossed lovers, ex-lovers, and lovers reconnected. It was Dylan's first evening out in quite some time as he was on weekend leave from his rehabilitation at the Glenrose Hospital in Edmonton. He roared with laughter at the physical comedy of lead actor Misha Albert playing the part of Elyot, and the Kate Hepburnesque performance of our dear friend Tiffany Bishop in the role of Amanda. The two younger thespians playing Sybil and Victor offered exceptionally strong performances as did the young Spanish maid whose short several minutes on the stage were unforgettable. In my mind, it was one of the best comedies on the Keyano stage in the past 15 years. I'd have to go back to It Runs in the Family (written by Ray Cooney) in 1996 to recall an evening of theatre as delightful, although the musical Nunsense came close about eight years ago.
Dylan has gone back to the Glenrose while Tiffany and Claude have departed for a much-deserved holiday down south. Christmas is rapidly approaching, a fact affirmed by one holiday reception after another, occasions that began peppering the calendar even in the dying days of November. As public officials, we get invited to more than a handful of these as Jolly Old Nick warms up his reindeer and prepares for his around the world excursion of fun on Christmas Eve.
One of the questions I've been asked most often in recent weeks in relation to my new role on Council is whether or not I'm having any fun. It's a fair query, one that I'm happy to respond to with an "Absolutely, yes!" I knew I would enjoy the learning aspects of this journey, but the truth is that I never would have guessed that I'd be enjoying it this much.
The term "Dream Team" has been bandied about in the media and elsewhere about the make-up of this Council. And while I understand that in acknowledging this assessment of our potential, it sets the bar perilously high for what the public expects us to achieve; I'm comfortable with the optimistic approach. This is a strong team, there is no question about it. 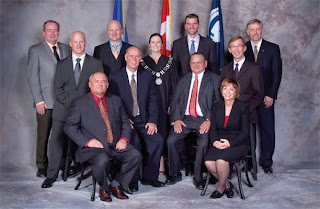 I'm particularly enjoying learning about public process, municipal governance and how to work effectively as a group. Tuesdays tend to be really good days as we gather for Council meetings and administrative briefs. We also see each other on several other occassions each week as we attend various public functions or committee meetings; two months in and Mayor and Council feel like my extended family. 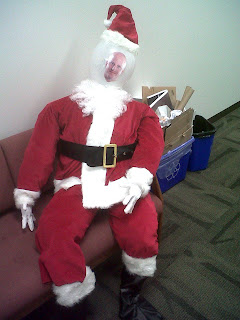 On Boxing Day, the Middle Age Bulge blog will be one year old. In that time, I've written 240 posts, lost 20 pounds, and added 10 back on as I landed in what they call the rubber chicken circuit after the election victory. My daily workouts at the Sport and Wellness Centre at Keyano have dwindled down to be rare occurrences as I find multiple excuses to avoid the gym. I'm hoping to refocus my physical health efforts after I finish that litre of eggnog sitting on the top shelf in my fridge and other delectable treats that promise to adorn the holiday season. So, maybe on Boxing Day I'll dust off my workout gear and get back on the treadmill and reignite the battle of the bulge.
Email Post