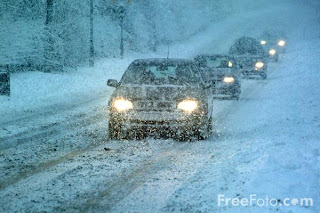 When you're heading south from Fort McMurray to anywhere, you often get a two word response when you share the news: "Drive safe!" The sincerity with which it is said, and the meaning and the history behind it is unsettling. It's a dangerous stretch of road, I would argue one of the most feared in the province, as it has gobbled up lives, destroyed families and provided more frights than your favourite Friday night horror flick.
I have a good relationship with Highway 63, but I treat her with respect. I stick to the speed limit and when conditions warrant, I knock back 5 or 10 clicks slower just to be safe. In truth, I'm probably one of those drivers that others curse for being too conservative, more often than not opting to follow at a safe distance rather than passing.
For the second time in a month, I did a round trip to Edmonton in one day, leaving at 5:30 am and returning by 8:30 pm - 10 hours behind the wheel with several hours in the city to spring Dylan from the Glenrose Hospital and bring him home for good after three months of recovery from leg surgery. Carrying the most precious cargo of my wife and children, I was more alert and cautious than ever.
As we're driving along, part of my brain is thinking about the animals that could suddenly pop out from the dark recesses of the snow-filled ditches, part is focused on long lines of approaching vehicles watching for someone being caught out in my lane trying to pass. Memories from the last trip were hanging out in the shadows of my mind, of just missing getting hit head-on by an errant passer and of slowing down to a crawl to pass someone who had his hazards on only to drive over the recently deceased deer lying bleeding in the middle of the lane, impossible to see in the frosty dark of early evening.
They (the people to spout off statistics) say that Highway 63 doesn't inflict pain because of extraordinary volume problems, that if you go by the numbers, it's not a stretch of road that deserved to be twinned. But everyone will tell you that it is 2.5 hours of steering-wheel-gripping driving fun that serves up more tanker trailers, semi-trucks and gargantuan over-sized loads that pierce right into the first third of the opposite lane to which they are traveling than anywhere else in the province. It is the volume of the big stuff that seemingly necessitates the "go for it" passing that often makes the head spin....and the metal explode.
In the seventies, after a long trip, in a car full of kids (we had 6), as we turned the corner on to Second Street, Mom would always say "Thank you God for getting us home safely." It embarrassed me then, I fully understand it now.
The other thing that is said about Highway 63 is that she is not to blame for the carnage that has happened over the past decade; human beings are to blame. Impatience, stupidity, ambivalence, imperviousness and a serious distortion of priorities all combine to make the trip from the outskirts of Fort McMurray to Grassland the crap shoot that it has become.
Our journey was incident-free yesterday, only shuddering through one moment of surprise as I swerved to miss a mangled mass of uncooked venison. Heading home on a Friday night, we were largely driving against the flow of traffic, as long chains of headlights swept past, clumped together as a caravan, before fading off into the horizon in my rear view mirror leaving us in the dark, alone, safe and sound, in one piece, one step closer to home.
December 18, 2010 - 204 pounds, 30.2% body fat
Email Post