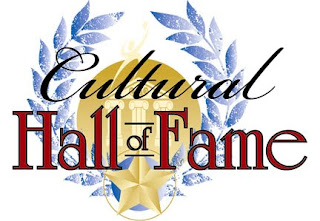 I posted a question on Facebook about creating a cultural hall of fame in Wood Buffalo and who would or should be on the inductee list. It was my first post where Comments out numbered Likes ten to one; a lot of people had strong thoughts on the issue.
I've been ruminating for the better part of a year on how to move forward with the idea of establishing a physical and public archive of the people who have shaped artistic expression in Wood Buffalo. The Wood Buffalo Sports Hall of Fame established in 2007 in the Syncrude Sport & Wellness Centre at Keyano College has set the pace, creating a contemporary display, an inductee process, and an annual tradition. The stories of our sports heroes are being captured and shared in perpetuity; we need to do the same thing for our cultural icons.
The names were put forward without hesitation and in great numbers as one suggestion inspired another. Theatrical names included Dick Mells, George Cotton, Greg Martin, Karen Towsley, Phil Kersey, Yvonne Balletto and Alan Roberts. Musical luminaries suggested were Martin Kennedy, Anna Domanska, Karen Rees, Peter Ellis, Mike Eddy, Mike Allen, Brent Lawson, Ken Flaherty and Norma Jean Atkinson, among others. Visual artists like Garry Berteig, Rodney Konapaki, Carol Breen, Fred McDonald, Jane Ash Poitras, and Rudy Pongo were named. Several dance icons showed up in the collection of 45 comments: Joanne Taylor, Patrick O'Donnell, Kim Hurley and Julie Funk.
No list of cultural achievers in Wood Buffalo would be complete without a shout out to those who came from here and left to earn a measure of success on the national and international stage. Aaron Lines and Craig Moritz have both made tremendous strides in the world of Canadian country music. Natasha Henstridge, jumped from being a teenager in Fort McMurray to being a Paris fashion model before exploding to global fame in the feature film Species in 1995. Of course, we also brag about Tantoo Cardinal, born in Anzac, who has achieved success in a number of films including Academy Award winner Dances with Wolves (1990).
What's exciting to me about this Facebook conversation is the recognition that exists about the builders who make it all possible. There are so many people who plug away, day by day and year after year, molding, shaping, nurturing the talent that exists in Wood Buffalo. Still others focus on creating opportunities and venues for artistic expression.
One thing is certain: that as time marches on, memories begin to fade and slip away. It's critical to begin this process and give these cultural stories a place to live and be relived.
Email Post