When my son was younger, I distinctly remember attending Christmas concerts and special events at the school and watching many parents rush to the stage to get video footage and take a multitude of pictures. I wondered (often audibly) what the heck they did with those seemingly innocuous bits and bites of memory. I would hazard a guess, this being about six or seven years ago, that some of the pictures got printed and the rest ended up on floppy discs that have since been buried deep in the local landfill. I would argue that things are very different today.
Look at this picture from the recent uprisings in Egypt. 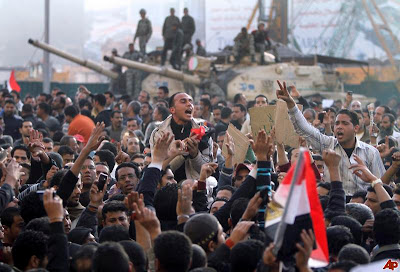 What is interesting about this image, and many more like it, is the number of portable devices that are capturing the event in real time. And connected to every mobile phone turned camera or video projector is a social media account and a network of contacts (or viewers) ready to accept content.
Latency has become a thing of the past with citizen journalism. I was in a media training session with a reporter from CBC who said that he could take a video of a news happening and have it uploaded and filed within 60 seconds. That's why news today travels at the speed of light, why I find out about the death of Michael Jackson from some faceless tweet 25 minutes ahead of any major news network.
Every person active in the social media universe, even if only in the smallest way, is his or her own news channel offering up a perspective of the world and influencing how the world is understood. How did this happen? Did anyone see it coming?
I accept the fact that not everyone is plugged in, constantly connected or interested in sharing the nuances of their lives online. I accept that some are skeptical, suspicious, wary, and even paranoid about what participation in the social mediasphere will do to their sense of security. I accept that this phenomena that has swept the world (notice the use of the past tense here) will pass some by, just like the television did several generations ago. But to say that social media is anything but ubiquitous would be just plain wrong.
I get excited when I talk about Twitter, Facebook and the incredible power of social media. It fascinates me how a homeless man with an incredible radio announcer voice can go from being an anonymous vagrant to a household name in less than 48 hours. How did that happen? This was shot on January 4th. This produced news bit was uploaded two days later.
It wasn't long before Mr. Williams reunited with his mother, got multiple job offers, did a Kraft Macaroni and Cheese tv spot, self-destructed, and met Dr. Phil who tried to make it all better. He is now in a sober-living home in L.A. ready to start his new life as a voice-over artist. How did this happen? Simply said, Ted Williams went viral, and his world (and ours) changed.
Historians will look back on what happened in Egypt over the past few weeks and social media will undoubtedly weave its way through that tale. A billion channels changed a country. A billion channels will continue to shape our lives in ways that absolutely no one can predict.
Email Post