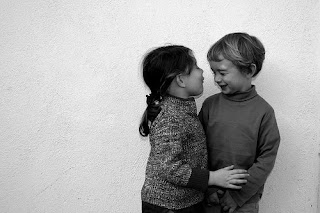 "Dylan has something to tell you," said Ben, as I stumbled in the door today.
"Not yet," said Dylan. "I'll tell him later."
-pause-
"OK, I'll tell you," he said. "I got kissed today! Twice!"
As he is only 11 years old and as I heard that the smacking action happened during a game of spin the bottle I started to panic, wondering where this story was heading.
"It was on the cheek," he said proudly.
I breathed a sigh of relief as my What! Me Worry?-meter went from the red zone back into the green.
While only a peck on the cheek, my son is about 6 or 7 years ahead of where I was at that age; my first peck of any kind didn't materialize until I was in grade 12. More important than the first physical connection was the flutter of first love.
"My heart is joy," Ben says, as he describes his close encounters with a special girl in grade 2, whether it's passing her in the hall or running away from her on the playground.
I'm so glad that both of our sons are interested in sharing their feelings and putting them into words. And I'm sure they will be mortified that I put their words into writing and put them in this blog. But years from now they will be grateful for an important piece of personal history that otherwise would have been lost to the passing of time, the onset of puberty, and the rat race of hormones about take over their lives.
Email Post