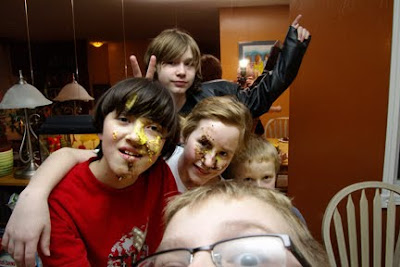 Testosterone is spinning out of control up and down our hallway, down the basement and everywhere else that pre-pubescent voices penetrate. My son Dylan is celebrating his 12th birthday with his annual sleepover-three boys (and Ben), hopped up on sugar, pizza and the wanton exuberance that erupts when they are allowed to leave it all out on the field.
Whew! Heather and I can't wait for them to go to bed.
While I don't remember birthday parties being this rambunctious when I was a kid, I'm sure they were. Thankfully, most of our birthdays happened at a time of year when we could take things outside into the back yard and the surrounding neighborhood.
There were times, however, when all the cousins were over in the wintertime when we would occupy every corner and crevice while the adults played cards or visited in the living room. Looking back on it, I really wonder how we all fit; that was a lot of bodies in what was a relatively small house.
Two of the boys here tonight have attended this particular celebration before, so there is plenty of context in terms of seeing how much they are growing up. One of them has shot up almost a full twelve inches higher in the past year and has grown into a voice that is strangely deep and perfectly awkward.
I started the evening attempting to control the madness.
"The doors stay open," as I pop into the study where one of the boys was surfing the Internet while the others chased themselves around the dark downstairs. And as hard as I try to keep the doors from slamming and the yelling down to a dull roar, I realize that I'm swimming against the current and need to acquiesce.
"Dylan showed me his butt," said one, grabbing for the potato chips mere moments after scarfing down half a pizza.
Silence. Screams. Laughter.
Did I mention we can't wait till they go to bed?
Email Post