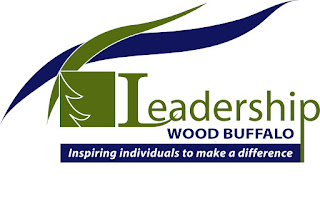 As we went around the room this morning, introducing ourselves to the Leadership Wood Buffalo Class of 2010-2011, Claude and I asked each participant and facilitator to share with us how they stay informed about what's happening in our community. There were a total of 20 people in the room and the striking thing was only three cited the newspaper as their primary source for information. A few people chose radio and a couple mentioned friends or word-of-mouth as the way they keep informed. It was Internet that ruled the day, far and away.
Think about yourself for a few minutes.
When you want to find out about the weather forecast, where do you go? I run to the nearest computer, as there is one in almost every room in the house, and make a quick dash to the Environment Canada website. Grabbing a newspaper or listening for a radio forecast doesn't even enter my mind.
You heard about an event coming up and you want some details, where do you go? I first check for a website before trolling though mymcmurray.com and the other radio station websites. As a last resort I go to the e-edition of the Fort McMurray Today. But I certainly don't look for a poster or run to the corner store to buy a paper, though those would have been my best options not that long ago.
Things are starting to destabilize in Egypt and you want to understand why, what do you do? I google "what is going on in Egypt" and the computer takes me exactly where I need to go to find out.
Traditional media is important, don't get me wrong. I'm a huge fan of the public record (newspaper) and the role that the fourth estate plays in keeping our feet to the fire. I'm also a big believer in the power of the radio broadcasting medium, having spent over a decade behind the microphone. But, the world is changing, and I fear that as communicators and public relations professionals that we're not keeping pace with that change.
I find out what's happening in the broader world from Twitter; it is my news aggregator, feeding me the hottest news of the day far in advance of newspapers or network television (or network websites for that matter). Whether it was the resignation announcement of our Premier or the sad news about the death of Michael Jackson, the news hit me first via Twitter. It was also my conduit to the two curling finals at the Vancouver Olympics when I was sitting in the middle of theatre, a world away from the live action on television.
I find out what's happening in my local community from Facebook. Of course, my knowledge of the community goes far beyond those items we would normally associate with being appropriate for public consumption with this particular social media site. I know far too much about the Bob who woke up with a vicious hangover or the Bobbie who wonders why everyone lies to her. As I said, the world is changing. This level of transparency would have shocked the shadows of our formers selves from as little as five years ago.
A smart man asked a group of us gathered for a workshop how many reporters we had in Wood Buffalo. Several numbers were shouted out: "8", "10", "12".
"How many people live in this region?" he asked.
"About 104,000," someone shared.
"Well, I would suggest to you that there are 104,000 reporters in Wood Buffalo."
Think about that one. All of us are our own news channel. Some of us have more "listeners", "readers" or "viewers" than others, but all of us are connected and have influence. How do we leverage this reality as communicators and public relations professionals? How do we tap into the spidery networks of our younger citizens who have grown up in a world of virtual connectivity?
These are powerful questions that fascinate me. My fascination was further enhanced when I found out that the Middle Age Bulge blog has had over 12,000 page views since I started writing these things 13 months ago. 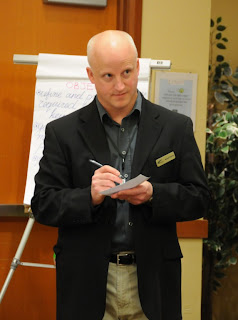 Photo courtesy of Peter Hansen
We had a lot of fun talking to this engaged group of community leaders about Managing the Message. Nolan Haukeness from MIX 103.7 and Bianca Jade from Shaw TV donated their time, peppering the participants with difficult questions during mock media scrums. As media professionals they too recognize that the world is changing. Nolan completely gets that the news story that sits on the MIX 103.7 website is just as important as the story that's heard over the airwaves, and that tweeting that same story is fundamental in today's universe of super connectivity.
Email Post