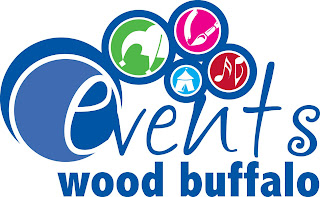 The newly elected President of Events Wood Buffalo, Greg Butters, summed up the last year of operations in one word: GROWTH. And perhaps a year from now, when Greg gets behind the podium to reflect on 2011, it wouldn't surprise me if he adds an additional word to his description: GARGANTUAN. 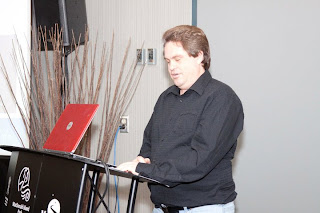 This was my first Annual General Meeeting of the Fort McMurray interPLAY Society not in the President's chair. (Note: the legal name of Events Wood Buffalo is the Fort McMurray interPLAY Society, dating back to 1990 when it was incorporated to produce the annual interPLAY Festival) Greg graciously stepped up this fall when I had to resign from the Chair's position as there were too many potential conflicts with my role as Councillor in the Regional Municipality of Wood Buffalo, now the major funder of the organization.
Greg joined the Board in 1997, the year that I became President, and has been with us ever since. He did a tremendous job with his opening address to the 25 or 30 people gathered for the meeting and social. He acknowledged Alan Roberts, who also had to vacate his seat at the Board table because of a new role (as Director the Keyano Theatre & Arts Centre), for his contributions dating back to the very beginning when interPLAY was a "Festival of Youth". 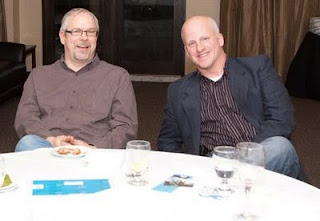 He spent a lot of time talking about the incredible staff we have at Events Wood Buffalo and our transformative Executive Director. Could I have guessed that we would have a staff of six and a budget of well over $2 million after just a couple of years? No way! Could I have guessed that WinterPLAY would turn into a true regional celebration and the largest winter carnival in Western Canada? No way!
Great ideas can change the world, but it takes great people to expose the potential that can flow of great ideas.
The idea for Events Wood Buffalo popped out of the sky in the fall of 2008 and landed in the ear of then Regional Councillor Sharon Clarkson who shared it with Carol Theberge at the Regional Municipality of Wood Buffalo who immediately saw the potential. Funding was secured, Claude entered our lives, then Pavlina, then Jennifer, and recently Misty, Daniel and Ricky. 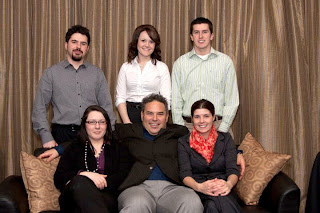