Deer in the Tulips

Heather and I went for a nice walk last night, down Fraser, over to Borealis Park, then all the way to the bridge construction project along the shore of the Athabasca River.  We had enjoyed a rare late dinner as we had the house to ourselves, both boys being out for the night.  A brisk walk was a perfect cap on what had been a lovely evening.

The air was crisp, barely hovering above zero, but sweaters and jackets kept us comfortable as we ascended the mountain of soil to get a glimpse of the river.  Spring has been unseasonably cool and the ice looks no closer to breaking than it did a week ago.  We might dive into May before I get to dip my fishing rod into the mighty Athabasca.

We walked back on the asphalt trail behind the Syncrude Towers and along the Snye before darting south on Hardin.  To our left, behind the chain link fence that surrounds the field behind the Clearwater Education Centre, under the half-light of the almost-full moon, we saw five deer grazing peacefully.  It was such a beautiful sight that it took my breath away. 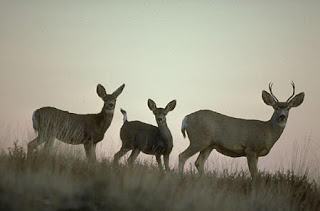 Through the small break in the fence and along a well-worn path, we meandered into their pasture as they continued eating, ambivalent about our presence.

Through the right-of-way that connects Hill with Demers we strolled along, picking up recyclables, as is our habit at this time of year.  We got home and settled in to watch a movie that I didn't quite finish on the flight home from Philadelphia last month, Hereafter, with Matt Damon. 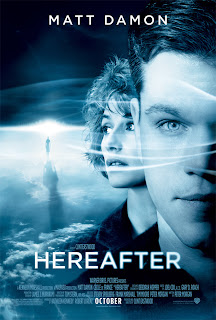 All of a sudden our curtains lit up as a car approached, coming up Armit Crescent.  This is a normal occurrence on most nights, but when the light continued shining we started to wonder what was going on.  As the shadow of a deer's head passed across the curtain, we realized that our furry friends had followed us home.

Heather and I poked our heads through the slits in the curtains and saw four of them feasting away in our front flower beds.  The one closest to us, just inches away from the window, looked up.  Its ears twitched as Heather whispered "Hello Mr. Deer."

As one of our neighbors stood in the middle of the street taking a picture of the unique scene outside our windows, our four friends took a final bite before ambling in front of our garage and out of sight.
Email Post