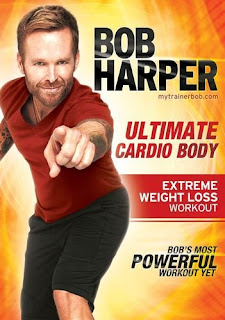 I have to admit that before today I had no idea who Bob Harper was, or anything about the show that he hosts on NBC called The Biggest Loser.  I'm not a big television watcher, but even if I was, chances are that I would skip over shows related to health and fitness (regrettably).  So, perhaps in my ignorance, I was a little skeptical about what the turnout might be for the Big Spirit Pep Rally featuring Mr. Harper, after what had already been a jam packed Community Celebration weekend.

As I looked down from the banister on the second level of the Suncor Community Leisure Centre and saw the line-up of people waiting to get in, I quickly realized the full scope of my ignorance.  Well over 1,000 people packed the field house and participated in a full-scale workout, complete with thundersticks and placards proclaiming our big spirit and energetic pep! 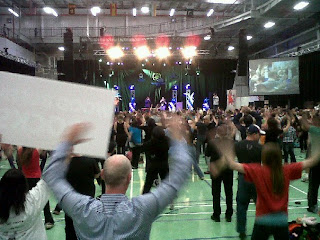 I joined Councillor Dave Kirschner in the calisthenics, swinging my arms and legs as wide as I could without knocking over the various people, big and small, on all four sides of me.  I made it through the stretches, lunges and jumping jacks before bowing out of the active portion of the fun to capture some pictures of the event. 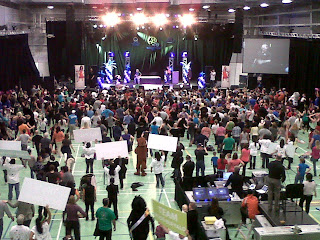 It was wonderful to see such a wide range of citizens smiling, laughing and being energized in this astounding display of spirit.  A young father, with three small children in tow, newcomers to Canada from Moldova, beamed as he watched almost 1,200 people doing jumping jacks.

"I had no idea this was happening," he said with a distinctive Russian accent.

"We just came out of the swimming pool and came in to see.  Incredible." 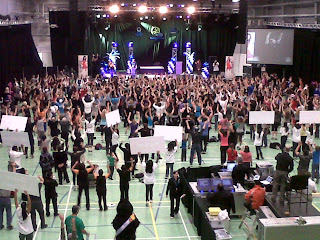 Several of the families affected by the Penhorwood Condominium evacuations were there, jumping, laughing, enjoying a much-deserved hour of unabashed joy.

Young people, old people, families, friends, neighbors - all celebrating and experiencing the big spirit that defines us.  It was a beautiful thing to see.

Councillor Sheldon Germain, a longtime member of the MacDonald Island Board, described this facility in an email I received tonight as "a destination for the region's citizens and a true community hub with events and activities for all; a place that showcases the greatness of this region.  I believe the activities of this weekend showed the flexibility and versatility of the redevelopment project."

I think he nailed it.

Big Spirit was in abundance as we closed out an outstanding weekend, celebrating the first full year of operation of western Canada's largest (and arguably, best) recreational facility.