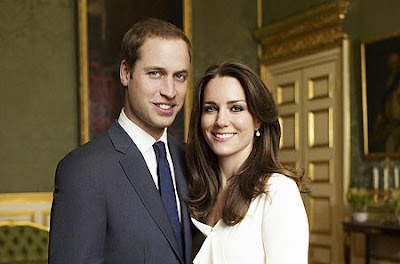 We are a cynical lot most days.  But once in awhile we put aside our pettiness, our cares and worries, and bask in the glow of something extraordinary.  About three hours ago, William and Kate exchanged their vows.  I didn't get up to watch it live, opting rather for a full screen viewing with Dylan and Ben on the iPad.

As William rotated that ring back and forth trying to properly get it on her finger, I couldn't help but think of Diana, watching the scene on the super-widescreen in heaven, smiling. 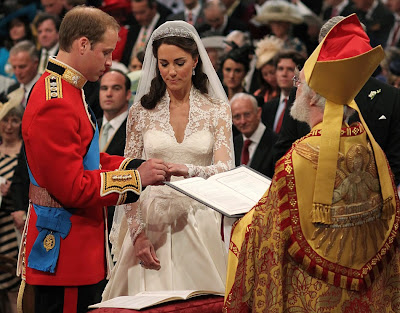 When Chuck and Di got hitched I did get up, at about 4 am if I recall correctly, with my mom.  At the time we thought her dress was absolutely stunning.  Looking back, I don't know how we had that perspective, but styles change-puffy shoulders were all the rage in the 1980's.

As hundreds of thousands of people walked peacefully up the Mall, making their way to Buckingham Palace for the balcony scene, it felt like a refreshing pause, a day of celebration after a long period of malaise.  We wept as Diana lay dying in a Paris hospital after that dreadful crash in 1997.  We grieved as her marriage to Charles became a train wreck.  We winced as the monarchy became more of a laughing stock than treasured tradition.

Storms pass, the clouds part, and the sun does shine again.  It was bright and warm today in London, and its rays shone around the globe, reminding us that there is good in the world. 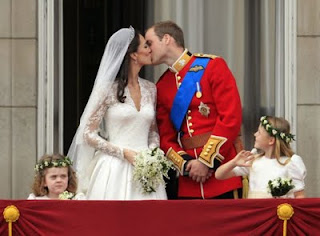 We watched live as the balcony doors opened and William and Catherine emerged, Ben curled up in a blanket on the sofa and Dylan sitting on the floor in his underwear.  The crowd went wild.  And as the rest of the Royal Family joined the new couple - the Queen, Philip, Charles, Camilla, Harry and all - hearts soared and hope returned.
Email Post