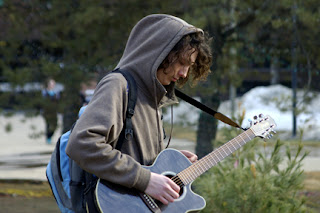 I packed up Ben and Dylan and brought them over to Doug MacRae Park to witness a protest turned party in support of the music programs at Keyano College. As we walked through the central part of the campus out into the front park it was pretty quiet. But within a few minutes people started pouring in from every direction, around the old gym, from inside the building, around the corner of the Syncrude Technology Centre and from across the street. 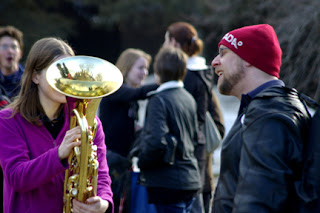 Students with instruments in hand clustered in small groups, jamming, laughing and enjoying the opportunity to rise up in solidarity, in common purpose. Guitars, drums, trumpets, baritones, violins and voice peppered the front grounds of Keyano. High school and college students, mixed with many members of the community comprised a crowd that was several hundred strong. 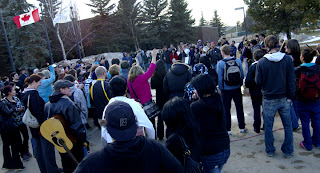 "I've been here 20 years, and I've never seen anything like this," said one longtime resident and fierce advocate for the arts, smiling. 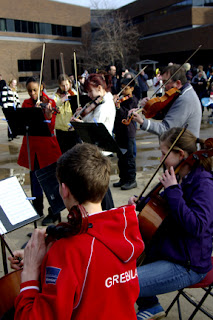 Dylan wandered through the throng taking pictures and video, happily meandering from group to group, doing his best to avoid the early spring puddles that were pretty much everywhere. Meanwhile, Ben zoomed up and down the sidewalks on his skateboard, watching and listening to the goings on from a distance. 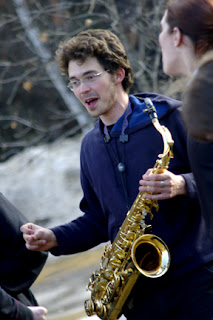 Words of encouragement poured in from the social mediasphere including a post from Councillor Don Scott who tweeted: Support the movement to keep music and the arts alive in #YMM - today's announcement shows bold leadership.  He posted this picture from the scene. 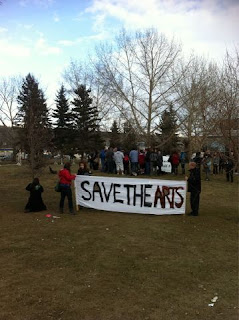 Councillor Mike Allen, also one of the stalwart supporters and participants of the arts in Fort McMurray for the past 15+ years, took this great photo and posted it on Twitter. 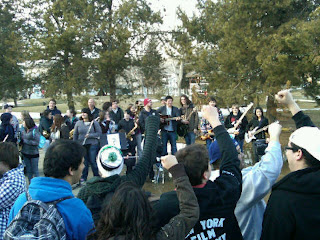 (I need to get me one of those iPhones, because they take far better pictures than my lowly old Blackberry)

In a small way, tonight felt like Woodstock to me.  Not that I was there - I was only two years old at the time - but it had that peaceful sit-in kind of vibe, one that I imagine they experienced on Max Yasgur's farm in August of 1969.  Just look at the faces in this group photo.  These are some of the members of the cast of Keyano Theatre Company's All Shook Up, a show that is opening in a couple of weeks.  The looks of joy,  fun and exuberance speak volumes, and perfectly captures the big music spirit that permeated the park. 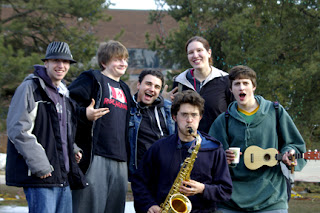 It was a journey to get here, but the destination turned out to be something special.
Email Post
Labels: Don Scott Keyano College Music