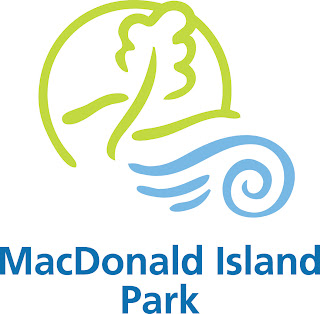 As 500 friends gathered for a stunning 8-course meal and celebration of the first anniversary of the opening of the Suncor Community Leisure Centre at MacDonald Island Park, we were taken back in time to when this patch of land surrounded by the Clearwater and Athabasca Rivers and the Snye was in the cross hairs of public debate.

"In September 1967 I was selected to be the Principal of Dr. K.A. Clark Elementary School," recalled Dave McNeilly at a ceremony held earlier in the day to commemorate the water wall in honour of Chuck Knight, former Mayor of Fort McMurray, one of the key figures who inspired the transformation of the Island to what it is today.

"The population of Fort McMurray at this time was approximately 2000 citizens.  Shortly after arriving, I walked from my home on Main Street to MacDonald Island.  It was completely covered in trees except for a small clearing where there was a barn that had been built years earlier by Mr. MacDonald."

From island forest to island playground, MacDonald Island in 2011 features a recreational facility that Kim Howell, daughter of Chuck Knight, described in one word, "Wow!"

The dream of MacDonald Island Park began almost 50 years ago as the municipality began to look at the potential development of the property.  A dyke was built to provide a permanent link and some protection from floods, providing the first opportunity to look at ways to use this prime real estate.  At a town council meeting when the idea of a recreation centre was first discussed, a tall, well-spoken, previously unknown citizen stood up and begin to inspire a shared vision of the potential and purpose of MacDonald Island.  His compelling speech set the course for recreational development and launched him into a political career that eventually landed him in the Mayor's chair.  Chuck Knight's name adorned the first iteration of the facility, after a renaming ceremony hosted by then Mayor and now MLA Guy Boutilier. 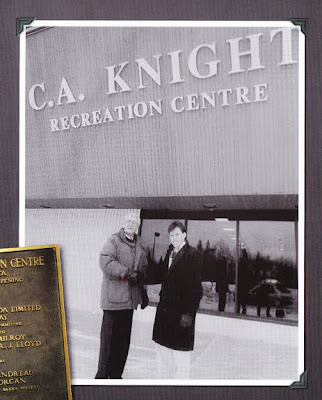 "I still remember the tear that was in Chuck's eye as he looked up and saw the letters of his name on the building," said Boutilier.

"I've learned much from him, first as Alderman, then Councillor, then Mayor.  I know he's smiling today as he looks down on all of us."

A photo taken by Carl Patzel and published in the Fort McMurray Today captured the memory and is featured in a wonderful booklet that was unveiled during yesterday's celebrations.

The future of MacDonald Island Park is bright with the development of an outdoor stadium and nonprofit centre, continued improvements to the Miskanaw Golf Course, and a bevy of events and celebrations using the largest recreational facility in western Canada.  Congratulations to everyone who had "skin in the game" over these decades, from Chuck Knight and Dave McNeilly to Sheldon Germain and Melissa Blake, from Ramona Morrison and Todd Jurak to Ravi Natt and Tim Reid.  Your efforts and those of countless others have created something wonderful.