Love Actually IS all around 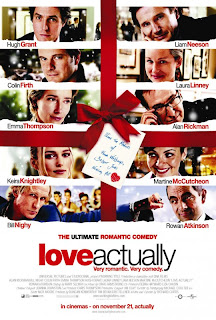 My go to Christmas movie has become Love Actually (2003). In years past it might have been Scrooge (1951) with Alastair Sim or It's a Wonderful Life (1946) with Jimmy Stewart, and certainly when I was a kid A Charlie Brown Christmas (1965) was King. Not only do I enjoy movies that have myriad plot lines that flow together as the film reaches its dramatic conclusion - Magnolia (1999) and Crash (2004) are two others that come to mind - but I love the sentiment it successfully captures: that love actually IS all around.

The opening scene is a collage of personal moments from Heathrow Airport in London. I'm not sure how they captured these authentic images of love, then how they subsequently garnered permission to use the images in a major Hollywood movie, but the effect is soul stirring.

Whenever I get gloomy with the state of the world, I think about the arrivals gate at Heathrow Airport.

General opinion's starting to make out that we live in a world of hatred and greed, but I don't see that.

It seems to me that love is everywhere. Often it's not particularly dignified or newsworthy, but it's always there - fathers and sons, mothers and daughters, husbands and wives, boyfriends, girlfriends, old friends.

When the planes hit the Twin Towers, as far as I know none of the phone calls from the people on board were messages of hate or revenge - they were all messages of love. If you look for it, I've got a sneaking suspicion love actually is all around. 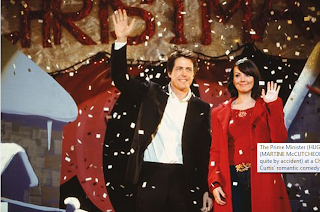 I like watching Hugh Grant in almost anything, but he's particularly endearing as the British Prime Minister who falls in love with the lady who brings in his tea every day before he finds her in the lascivious claws of the slimy U.S. President and "redistributes" her. I love the fact that she comes from the dodgy end of London and that she's not perfect.

Love Is All Around is actually a song originally done by a British rock group called The Troggs. Actor Bill Nighy, playing a 50-something drugged out rock-star-has-been, records a Christmas version of the tune which becomes the unexpected hit of the holiday season. The song is great, as is the Robert Palmer inspired video. 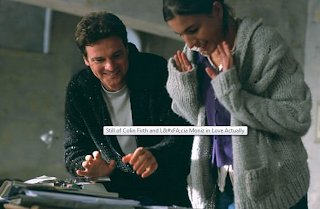 Colin Firth is wonderful as the jilted writer who comes home from his best friend's wedding to find his brother in bed with his wife. Ouch! He cloisters himself at a far away writing retreat and in a matter of three weeks falls head over heels in love with his Portuguese cleaning lady who speaks not a lick of English. By the time he proposes on Christmas Eve they've magically both become somewhat fluent in each other's language. Plausible? No. Beautiful? You bet. 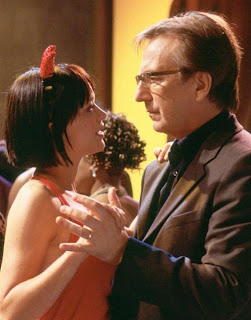 Alan Rickman plays the boss at an advertising agency who is not necessarily in a loveless marriage - with a lovely lady played by Emma Thompson - but one that has become a little predictable and stale. He almost becomes the cliche, falling for the advances of his devilish and smitten secretary. He gives her a beautiful and expensive gold heart necklace and gives his wife a Joni Mitchell CD. Unbeknownst to him, his better half had sneaked a peek at the little trinket before he had passed it along. Seeing her heart break as she stood stunned in her bedroom to the haunting sound of Joni's "Both Sides Now" is one of the most powerful scenes in the film.

I find myself in tears every time I watch Love Actually, as all the story lines converge at the Christmas pageant, complete with lobsters and octopuses gathered around the manager. Sure it is a fantasy and life can't possibly work itself out so perfectly in the three short weeks before Christmas. But I don't think that's the point. The point is that love truly IS all around us.

It's often not pretty, or glamorous. Sometimes it's downright painful. More often than not though, it's warm and comforting. All you have to do is look for it.