What better topic can there be on New Year's Eve than looking back on the year about to drift away into the history books?  I feel fortunate because I have a great timeline of events, ideas, stories and images contained right here in the Middle Age Bulge blog.

Started two years ago as a weight loss incentive program after getting inspired from the Julie and Julia movie, I have carried it on as a forum for creative expression and for sharing with a growing audience.  Over 400 posts and 50,000-plus page views later, it just seems silly to think about stopping.  Much like my recent rediscovery of my visual art passion, this blog has been a catalyst for exploring my interest in writing.

SHADOW OF MY FORMER SELF

I started this thing to lose weight.  While I dropped 20 pounds on the first go around, the lifestyle didn't stick and eventually, ever so slowly, the weight returned.  Seeing one of my oldest friends over the summer in the best shape of his adult life, I made an unanticipated and very unexpected decision to go on the Ideal Protein program.  Through the first of my weekly updates (Battle of the Bulge, Part 2) to the most recent post (Ideal Protein Update) 100 days into the program illustrating how much my eating habits have changed, you can't help but notice that the results have been dramatic.  There is no question that this has been one of the most significant threads in my story line of 2011.

Looking back on long forgotten posts from almost a year ago, there are several nuggets that capture slices of family life that might normally be lost to the recesses of memory.  Ben brilliantly shared the lingering after effects of a bad dream in I Just Wanted To Come Home.  Dylan shared one of life's milestone moments in First Kiss.  Heather and I shared many evenings enjoying our nightly offerings of great tv shows: Six Feet Under, Breaking Bad, Weeds, Deadwood, and The Big Bang Theory.  We were watching a rare movie when we had some delightful interlopers in our flower bed (Deer in the Tulips).

When my dad ended up in the hospital for the first time in three decades, battling some digestive issues, I sensed that we had potentially reached a crossroads. I have been blessed with aging parents who have remained active, vigorous, and enormously healthy.  "They shovel the sidewalks in the neighborhood," I like to say, "for all the seniors."  But when a hospital stay for digestive issues morphed into emergency surgery for colon cancer everything changed on a dime.  The Great Equalizer captured the idea that illness levels the playing field, a sharp reminder that "death comes for us all, even for kings he comes." (Robert Bolt, A Man For All Seasons).  As the year waves goodbye, Dad is recovering at home, going for daily walks to the senior centre, getting lots of rest, gathering strength for the inevitable chemo and radiation treatments to come in 2012.

There are four blog posts from the past year that sit atop "most read" list.  Two of them, Growing up KISS (#3) and Meeting Mr. Simmons (#4), provide a personal perspective on what it meant to have one of the greatest rock band in the world here in Fort McMurray.  Meeting the men behind the make-up remains one of the exciting 45 seconds of my life.  The second most read blog post reflects one of the most positive stories of 2011, the Royal Wedding of Prince William and Kate Middleton.  I'm convinced that the only reason it was viewed by over a thousand unique visitors was that for a period of several days, the photograph of the couple located within the post was a top-level result in the Google search for "Royal Wedding 2011".  In a query that produced over 60 million hits, the photograph located in the Middle Age Bulge blog was third.

THE MOST READ blog post was unquestionably Slave Lake is Burning.  It was a story that captured the attention of the nation and much of the world as fierce winds turned a neighboring forest fire into a near death knell for a small Alberta community.

There were two blog posts that were published at a time when the system wasn't working particularly well and I have no idea of how many unique visitors they attracted.  Both stories are about connections.  Remembering Julius highlights a touching interaction between my father in the 1940s and a farm hand that turns out is the late uncle of our current Minister of Finance in Alberta, Ron Liepert.  Searching for Dave Rodney is a fun little piece about my quest to find the MLA for Calgary-Lougheed at the Premier's Dinner in October.  I was sitting in Boston Pizza in Vermillion on my long trip home to be with my father for his surgery when Dave and I finally reconnected by phone.  The last time we had talked was February of 1986 when we partied late into the night celebrating the successful run of A Man For All Seasons with Newman Players at St. Thomas More College in Saskatoon.  I went on to a career in radio; he went on to climb mountains.  Eventually, we both ended up in public life in the great province of Alberta.

There are many images scattered through the 161 blog posts in 2011.  I'm going to close off this retrospection with a new one, and arguably, the picture that seared itself to my soul the most.  As the surgeon gave us the news after Dad's surgery, this was the image that popped into my mind along with an overwhelming sense of gratitude.  While Heather and I were enjoying the wonders of New York City with Claude and Tiffany, Dad worked with Ben to paint the tree house in the back.  That he was able to spend quality time with both of our sons before embarking on the fight of his life and that Mom captured this moment on film, I am so grateful. 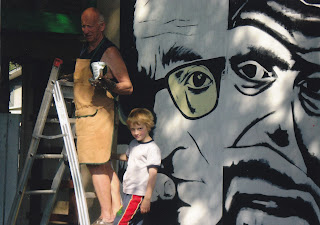 This one's for Dad, visualizing a story of remarkable healing that I will write one year from now.
Email Post