On the stage again 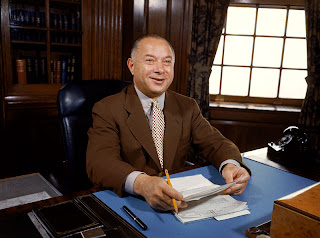 I found out this week that I'll be playing the role of David Sarnoff in Keyano Theatre Company's production of The Farnsworth Invention, written by Aaron Sorkin.  I'm terrified.

Don't get me wrong, I'm not scared of getting on stage and acting in front of a 600 people. That's the easy part.  What I'm petrified about is the work that needs to happen between now and then.  The thought of being away from home night after night for a six- to eight-week period is a little daunting.  The last time I took the leap was in 2006 when we did Beauty and the Beast.  I had the "old man" part in that production, too!

Despite a busy schedule that will still include a lot of Council commitments, I felt it was important to follow my instincts, which have been screaming to me to audition for this play since I first read it cover to cover last year. That audition turned out well and I got the call saying the part was mine if I was willing.  I am.

The memories from the stage at Keyano Theatre are many, flavoured with laughter, friendships, mishaps and missteps.

I had my first taste of fun in the 99-cent Theatre production of Twelfth Night, directed by Douglas Abel.  I played the part of Sir Andrew Aguecheek.  Wearing big red shoes, I assumed a posture through the entire show that suggested I was in a perpetual state of having to use the washroom.  They laughed a lot, so I'd like assume that the choice worked.

Next it was The Grapes of Wrath directed by Maralyn Ryan.  I got the call about getting the role of Tom Joad in the middle of our OK Radio Group Christmas Party.  To this day I remember letting loose with a tremendous yell.

"YES!!!!" I screamed, as everyone turned to see what the heck had happened.

It was a fun production and a great part.  That was 1998.  The following year offered my first opportunity to work with director James MacDonald and a return to Shakespeare.

Our production of Taming of the Shrew was set in Newfoundland or Fort McMurray, I can't remember which, and featured Catherine Yuill as Kate playing opposite my Petruchio.  My goodness we had fun!  It was also my first and only opportunity to drive a quad on stage.

My son Dylan was born in the middle of the run of that production, some six weeks earlier than expected, which added a pretty incredible dynamic to the experience.

A Wonderful Life followed later that same year, a musical version of the popular story also directed by MacDonald.  I don't remember much about that show except having to sing in front of people, speaking of frightening thoughts!

Acclaimed theatre artist Thomas Peacock joined us for Arthur Miller's Death of a Salesman in 2000.  Douglas Abel was stunning in the lead role of Willy Loman.

It was a tumultuous experience for me, as my personal life was in turmoil at the time, and ended with the snapping of my Achilles tendon a few scenes into the closing night performance.  Not knowing what had happened, I continued on with the show, limping from one piece of furniture to another.  Being the idiot that I am, I chose to go to the cast party rather than to the hospital. I didn't find out what happened till the following morning when I dragged my sorry butt into emergency.  Surgery happened the next day in Edmonton followed by several months of being in a cast and on crutches.

I remember falling into the wings, not knowing what had hit me.  It felt like someone had chopped at my heel with a blunt ax. I cringed in pain trying to make the costume change backstage with the help of my dresser Linda, then crawled up to the second level of the set in the dark and into the bunk bed, doing everything not to pass out.  I can't image what was going through the minds of the stage manager and crew, as they obviously knew something had gone terribly wrong.  But, adrenalin kicked it, as it often does when health issues emerge in the middle of a play, and the show continued on.  They said it was the best performance of the run, and that the injury somehow occurred at a point in the story where it made sense.  Maybe they were just being nice; I'll never really know.

I returned to Shakespeare and the direction of James MacDonald in 2002's Romeo and Juliet, playing the apothecary, Friar Laurence.

Then I worked under Marianne Copithorne, playing the very scary Roat in 2004's Wait Until Dark.  I ended that show getting stabbed to death by a blind girl played by the incredible Pattie Dwyer.  And as grisly as that sounds, it was kind of fun, though exhausting, as we had quite a fight to end the night.

Now the line learning begins as we prepare to stage the wonderful story about the invention of television and the legal battle that ensued between Philo Farnsworth (being played by Michael Beamish) and Mr. Sarnoff, the self-acclaimed father of television

Sarnoff:  Good evening, I'm David Sarnoff.  There's a rule in storytelling that says you never tell your audience something they already know.  But I'm gonna chance it anyway by starting like this...
Email Post