The great influencer - YOU

At some point last year, our dishwasher was once again crapping out.  I say "once again" because it was a few years earlier when it first started acting crazy.  At that time, we called in Shane Young from True Tech Appliance Repair, and for less than $100 he cleaned everything out and we were back in business.  This most recent time, I sent him an email and had a phone response almost immediately.

I was stunned.  He came. He fixed. We once again have a fully functioning dishwasher.  So, rather than adding to the landfill and putting out $1,000 for a new machine, Shane gave our unit new life and we spent less than $100.  From start to finish, less than an hour.

Admittedly, this isn't going to happen every time. But this was yet another occasion when we had extraordinary service and in this new social media age, we're not afraid to share the good news.  I believe authentic endorsements really influence.  A handful of times since then - this was probably 6 months ago - friends on Facebook have asked "What was the name of that person who gave you amazing service?"  People remember.

We are in the frigid grips of an arctic front that has swept in and taken us from record high temperatures down into record low territory, all within just a couple of days.  One of my friends on Facebook shared this morning that her car wouldn't start yesterday, so she took it to OK Tire who found the problem, installed a new block heater, and got her back on the road, all without an appointment.  Guess who is singing their praises this morning? Guess who you're going to think of if you find yourself in a similar position?

We all have influence, and more so than ever before with our ever-expanding networks on Facebook, Twitter, LinkedIn and myriad other social media channels.

Ticket sales for the recent TorQ Percussion Quartet were pretty soft until a number of people started saying on Facebook how excited they were to see the show.  Those authentic responses to an upcoming concert generated a buzz that resulted in higher than average sales in the two days leading up to the event.

Social media guru Ken Chapman provided an illustration of the influencing potential of Twitter, as an example, during a workshop last week. 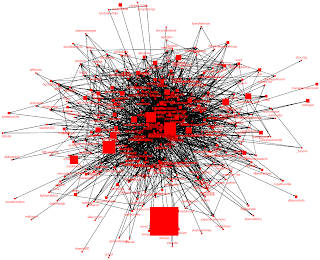 "If you had 1,500 followers," he said, "and you tweeted something that was so compelling that every single one of your followers retweeted it, and each person who received that message also retweeted, it would reach about 9.8 million people."  That is crazy!

In the 1960s they sang about "Power to the People!" In 2012, people still have the power, only now they can reach far greater numbers at speeds and effectiveness that were the stuff of science fiction back in those long-haired hippy days.

"You have no idea how amazing this is," I said to Ben last night, after uploading his latest painting to his art folder on my Facebook page.  "Being able to scan this painting, upload it to a website, for people from around the world to enjoy, is an incredible gift." 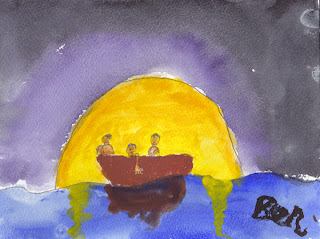 His "Three men in a row boat" painting has been seen by people in Mexico, California, Nigeria, and even The Vatican.  It has been seen by mothers, fathers, plumbers, teachers, politicians and oil executives.  Imagine what would have had to have happened 10 years ago to achieve the same distribution.

We all have an unparalleled opportunity to influence, an incredible power to change world.  Use it wisely.
Email Post