In praise of the bath 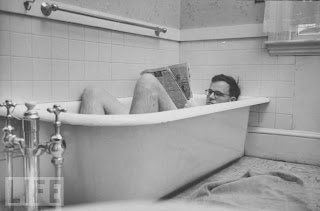 I've just endured 48 hours of not being able to have a bath.

"You can't have a shower or go in the pool," they said after hooking me up to a Holter monitor on Friday, five sensors stuck on various spots on my chest connected by a rat's nest of wires to a battery powered box attached to my belt.

"How about having a bath?" I asked hopefully.

I've always been a bath guy, one of those things that got passed down from my parents.  They both enjoy a leisurely soak in the tub rather than a stand up and get 'er done shower.  For any germaphobes reading this, you may want to click out now, as you may get a bit squeamish with this next bit.

In my house growing up, a nice hot soak would always be followed by shouts of "Does anyone else want a bath?"  And more often than not, one of us would gladly rise to the invitation and make that tub full of water go just a little bit further, often two or three of us in succession if truth be told.  And if this was happening after a day at the farm working in the garden, you can bet your bottom dollar that the water would be a murky brown by the time someone pulled the plug.

We have a large family, and a father who was famously frugal, so optimizing resources was a big part of our daily lives.  "Come and have a bath", "Don't use so much toilet paper", and "Shut off the lights when you leave a room" were frequently heard exaltations throughout the first 18 years of my life.

"I was so busy trying to avoid turning into my mother that I turned into my father," said one of my female cousins recently.

I was so busy trying not to turn into either of my parents, but have ended up growing into a blend of both.

"Who wants a bath?", "Why do you use so much toilet paper?" and "You left your light on" are heard in our house on an almost daily basis, along with "Finish your vegetables", and various other commands that my two sisters and three brothers heard over and over again.

Some may resent the fact that we grow into our parents, but I feel grateful.  I embrace the fact that I am far more comfortable running a bath full of hot water and bubbles than having a shower.  I'm OK with it.

And honestly, when I'm on a trip staying in a hotel that either doesn't have a bath or one that has a drain plug that doesn't work, I want to jump out the window and end it all.

I get the sense that I'm in the minority on this one.  There is a hotel in Calgary that shall remain nameless (rhymes with Schmelta Mow Talley) that I've stayed at year after year.  And despite the fact that it is a higher end establishment, they purchased bath tubs that have a plug system that ultimately fails.  I've never been able to have a bath at this place and most recently, found myself stuffing the hole with a face cloth to slow down the escape of the water.

I do my best thinking in the bathtub.  It's also a great place for reading.  As a young broadcaster, I got into the habit of grabbing whatever magazine was lying around and reading it aloud while soaking in the suds.  There is an awesome resonant quality about the sound in a bathroom that lends itself to hearing yourself in a way similar to when you're wearing headphones.  Reading random writings aloud in the tub over many years honed my sight reading skills and my ability to be expressive on the fly.  I would recommend this practice to any aspiring radio, television or podcasting hopeful. It works.

So, as my 48 hours of wearing the Holter monitor came to an end, I ripped off the sensors, along with more than several of my stubborn chest hairs, filled the tub up with hot and bubbly water and returned to my happy place.
Email Post