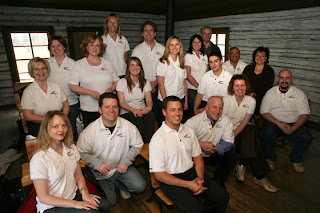 I have often told the story that the seeds of what grew into Events Wood Buffalo were sewn in the fertile soil of our community leadership program.  I distinctly remember a learning day with former Regional Councillor Sharon Clarkson who talked about the notion of connecting the dots, releasing the power and potential of collaboration.  That lesson and the ideas that sprung from it, helped contribute to the idea of creating a new entity that would leverage the assets of the Fort McMurray interPLAY Society to enhance festivity and celebration in our region.

Leadership Wood Buffalo began in the fall of 2006 and has since graduated five cohorts of aspiring community leaders.  I recently worked with some of my media friends to deliver a short workshop called "Managing the Message" with the sixth cohort of this community leadership development program, the largest to date with 25 participants. 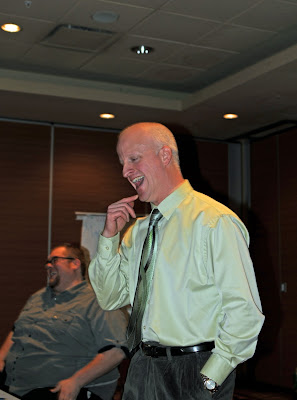 Nolan Haukeness, a seasoned media veteran, radio broadcaster and columnist, helped me share some helpful hints on how to best get the message you want out into the world in a nonprofit/volunteer setting.  We then split the class into five groups, each of which were given a real world scenario that they had to use to host a press conference.  They had 10 to 15 minutes to prepare key messages, figure out who was going to do the speaking, and strategize as to how they would handle the media.

The scenarios were all partially rooted in reality and ranged from local seniors launching an Occupy Willow Square lobbying effort to the Fort McMurray Potter's Guild announcing a move into MacDonald Island.


Going through this kind of roll playing exercise is no easy task when you've had a full day of training and preparation, so you can imagine what it was like with a mere 15 minutes of prep time.  Even in the face of a daunting media panel that included Bianca Jade and Chandra Rempel from Shaw Cable, Morgan Modjeski from the Fort McMurray Today, and Nolan from Rock 97.9, the groups performed remarkably well.

I had asked the media gang to really let them have it, and these mock press conferences resembled a full-court press in basketball, complete with pushing, shoving and distraction tactics.  It was delightful. 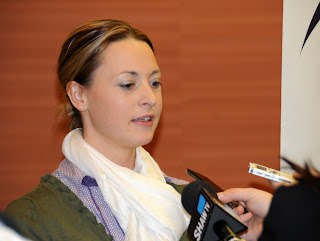 One of the standouts in the media training exercise was Michelle Landsiedel, an operations coordinator with Suncor Energy.  She was an extraordinary spokesperson for the Potter's Guild and absolutely nailed her group's key messages.  I've since heard her excel with the real deal, handling the public relations portfolio for the upcoming TEDxFortMcMurray event on March 30th.

We enjoyed a lovely chat at lunch during the Leadership Wood Buffalo learning day as she shared with me the various things she is involved with in the community.  It was an impressive list of passions that I won't even begin to try and repeat, but her closing salvo I do remember.

"All of this is a result of being in Leadership Wood Buffalo," she said.  "The relationships that I've made, the people I've met, have directly led to all of these community opportunities."

I was both stunned and delighted.  Here was the ultimate testimonial of why this program is so important.


When I look back through the names of over 70 graduates and the dynamic group that will graduate this spring, it is easy to see the community impact of Leadership Wood Buffalo.  Politicians, executive directors, extraordinary volunteers, this impressive cadre has firmly grasped the leadership challenge that was issued by those wonderful community champions who recognized that with their imminent departure there would be a tremendous leadership gap.

If you're interested in finding out more, there will be a Leadership Wood Buffalo Information Night on March 1st at the Merit Hotel.  This is an opportunity to hear about the program in detail as we begin the recruitment process for the class of 2012-2013 that will begin in September.