I'm so pleased that my call to action about exposing the arts in Wood Buffalo was heard.  Father Patrick Mercredi Community High School is producing Little Shop of Horrors at the end of March, a fantastic musical by writer Howard Ashman and  composer Alan Menken.  The company (MASC) is pretty excited because for the first time in a decade, they are performing on their home turf. 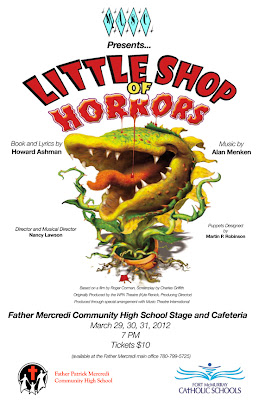 "The students spend a large portion of their life at school, and in some respects it's 'home'," she said.  "I feel that it may help bring out more of the school community as they will continually see the set as they are going to classes."

For the smaller ensemble cast, being able to work on the set in the weeks leading up to the performances, scheduled for March 29 - 31, is a definite advantage.  It gives you an opportunity to become familiar with the nuances of the set and the space, a glorious luxury in the view of this aging amateur thespian.

They must also be excited about some of the technical fire power being lined up to bring magic to the finished product.  Patrick Marchand and Alan Roberts, a formidable audio and lighting team with long histories of excellence in Fort McMurray, will complement a set being built by Kevin Barre with artistic direction by Jeanette Miller.

The key to doing a successful run of Little Shop of Horrors rests on the technical imperative of having a series of puppets to play Audrey II, "an ill tempered, foul mouthed, R & B singing carnivore who offers a down-and-out skid row floral assistant fame and fortune in exchange for feeding its growing appetite," said Lawson.

The Audrey II that will be used in the MASC production is actually a series of four puppets that they have rented from Music Theatre International (MTI) in New York.  Worth over $20,000, the man-eating plant paraphernalia comes in two crates, weighing 600 and 300 pounds, respectively.

By the way, the voice of Audrey II will feature Father Mercredi teacher Michael Parr who you might have seen at the opening of the Suncor Energy Centre for the Performing Arts performing the role of the Phantom.  He has an absolutely striking voice and will add a lot of value to the production.

I did a lot of theatre when I was in high school but never had the opportunity to try musical theatre.  It requires a different level of dedication and results in a requisite measure of skill development.

"Musical theatre combines acting, singing and dancing," said Lawson.  "It require the ability to combine these core skills convincingly.  It is a fun, creative and supportive environment.  There are a variety of students involved.  Some have been focused on their music and dancing skills for several years while others have been involved in music and drama, or just drama. It is wonderful to see talented individuals keen to share their creativity with an audience."

Little Shop of Horrors is at its core, a great story with an important lesson that craving for celebrity at the expense of character can have horrifying results.  WARNING: this is a horror show, including scenes of violence and language.  People get eaten by a plant.  Yummy!

It goes without saying that the music in this show is awesome! With a band directed by Brent Lawson and featuring local award winning guitarist Simon Budd, this is an evening of live entertainment that needs to go into your calendar right now.