A dream that became an Island playground

It felt like months since my last visit to MacDonald Island.  Getting swept up in rehearsals and production for Hometown...The Musical! kept me busy on the opposite end of Franklin Avenue.  So, the effect of seeing the entire centre teeming with people yesterday was more pronounced than normal.

From the moment we walked into the building, groupings of families surrounded us, some just standing around catching up, others waiting for kids to emerge from the locker room and pool, and still others standing in line waiting to get their wristbands for their favourite activity.

In the library, at Yogen Fruz, on the ice, everywhere I looked there were people actively engaged with the facility and with each other.  I couldn't help sending out a tweet to share the moment because I was once again overwhelmed and delighted at what I was seeing. 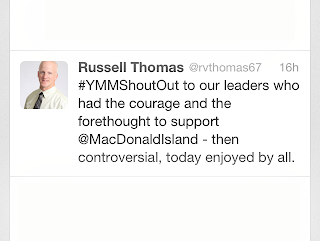 In that flash of appreciation for the level of participation and energy that I was witnessing was a realization that we didn't magically get to this place.  The road to opening the Suncor Community Leisure Centre - according to Alan Doyle of Great Big Sea "the single greatest civic achievement he's ever seen" - was bumpy at best, outright perilous at worst.

The truth of it is that the dream that became an island playground was fraught with challenge and controversy, for a long, long time.  It's easy to forget the dynamics that existed during the early days of MacDonald Island's redevelopment, as it has achieved so much success and international notoriety for the experience it delivers today.  However, we need to remember and acknowledge the courage and forethought it required to move forward with a project that had an ever-escalating price tag, an uncertain operational model, and public support that was somewhat tenuous.

Was everyone waving the flag of approval and shouting "Spend! Spend! Spend!" on the street corners?  Absolutely not.  Everyone had an opinion, and they were quite vocal about sharing them.  Tensions were high, debate and rancor around putting a work camp on the Island to accommodate the construction force was bombastic, and uncertainty and frustration about the massive spend and the delays were everywhere.

But the leaders of the day pushed forward, kept their eyes on the vision, and the angst around MacDonald Island dissipated into memory fragments, almost impossible to piece together  now because of the overwhelming impact it has had on a community, on families, on you and on me.  Vision became reality, and through extraordinary leadership from the MIPS Board, Tim Reid and the passion and excellence of the Mi Team, MacDonald Island Park has grown into a recreational powerhouse that is a model of success that centres across the country now attempt to emulate. It has set a new standard of excellence, and that's something in which many people and organizations can take tremendous pride.

I guess the point of this post is to encourage residents and leaders alike to reflect on how we got here, to this place and time when we are able to enjoy a world-class amenity.

We are about to go through several major developments that could equally impact our community, families and selves, three, four, and five years down the road when they theoretically would open.

Try to look at the merits of individual projects through a lens that looks forward, imagining all the changes that will occur between conception, planning, community engagement, final design, construction and opening.  What transportation improvements will have occurred?  How will the parking situation have been addressed?  What will have happened to make using public transit your first thought, rather than your last?

Your input, your questions, your ideas are all integral to the success that lies in the future.  Raise your voice, seek out your elected officials, share your opinions on a blog, attend an open house, take a survey, and yes, even get angry when you need to.  We're not all going to agree as we continue this change process, and that's OK.  What's not OK is sitting back and just letting it all happen, then complaining about it later.

Our community, at least in the time since I've been here (1996), has always been in a state of change.  Well, change is still going to be constant and exponential going forward as bridges and interchanges get completed, as the bus transit way gets established on Franklin Avenue, as densification proceeds in the city centre, as Parsons and Saline Creek get built out, as our population continues to grow, and as the twinning of Highway 63 gets done within the next three years.

When you consider the next big thing, whether it is a downtown arena, a recreation complex in the north end, an aging in place facility, or a new performing arts centre, take a moment to absorb the vision, and measure it not against the world as we know it today, but the world that we will inhabit together a couple of years down the road.
Email Post