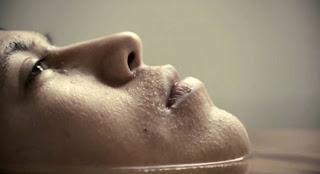 I read a review of The Lesser Blessed - the film we watched last night as part of the TIFF Film Series at Keyano Theatre -  to start my day, a piece written by Julie Nelson back in September 2012. She described the feature as an "intimate and bleak tale", "an incredibly dark film".  I found it otherwise.

Richard Van Camp, executive producer and author of the book on which the film was based, could not join us last night.  He was meant to say a few words about the film, the process of getting it made, and the story.  Unfortunately Mother Nature had other plans, blowing in an early spring whopper of a storm that grounded planes and sent vehicles flying hither and thither.  I wish he had been able to join us as I know that extra context and background would have added to what turned out to be an amazing experience.

I was sitting with my son Dylan, a member of the Fort McKay First Nation, now a lumbering teenager, soon to be taller than me, slight of build, thoughtful, and wise beyond his years.  Soon, he will be the age of the lead character Larry Sole, played by Joel Evans.  He was understandably captivated, though we haven't had a chance to discuss at length what he got from the film as it ended up being a double feature, so it was pretty late by the time we got home.  But I look forward to getting his impressions, how much he saw of his own experience living in the north and spending time in a small First Nation community. 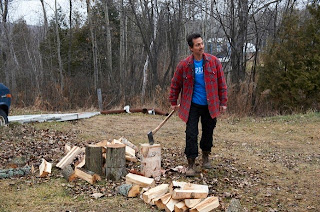 Getting Benjamin Bratt on the project had to have been viewed as a major coup.  He added incredible weight to the picture, playing the here-again, gone-again boyfriend of Larry's mother.  "Weight" is the word that keeps rising to the surface for me when thinking of his performance. Grounded, stoic, present, as Jed, Bratt blended perfectly into the landscape and story as if he is one of our own. He is actually from San Francisco, born of Peruvian and American stock.

"That's Benjamin Bratt," I said to Nika Knight, Heather's cousin from New York City who has been with us for much of this week doing research for her masters thesis.

"Awww, that's why," she said.  "I've been sitting here trying to figure out why he looks so familiar." 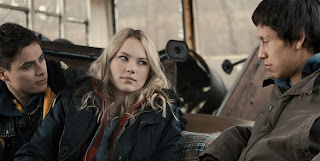 Dylan remembers far more clearly than I, the story that Van Camp told when he last visited us about plucking Joel out of the crowd after a long and, up to that point, fruitless search for someone to play Larry Sole.  So, I won't begin to attempt to craft a shaky version of the truth.  Rather, I will speak to what I know for certain, that this young man blew me away.  I couldn't take my eyes off of him as he couldn't take his eyes off of Juliet Hope, played by Degrassi's Chloe Rose. His expressions, subtle, yet screaming, filled the largest video screen in Fort McMurray - stretched 40 feet across the proscenium at Keyano Theatre, lit by a state-of-the-art projector that delivered incredible resolution and a superior movie viewing experience.

My heart soared every time the director, Anita Doron,  employed a helicopter to get sweeping shots of the northern landscape.  In over 17 years of living up here, the boreal forest has grown to be captivating, enduring, strengthening - it feels like home.  The bleakness that Nelson described in her review last fall, understandable with an eastern big-city orientation, engenders a completely different response for me, as does seeing young people and families living their remote northern rural life, despite their challenges, tragedies and apparent hardships.

Van Camp deftly demonstrated his ability to communicate, through both words and story, the richness and wonder of the spiritual world that cultivated his sensibilities growing up in Fort Smith, NWT, when he delivered his unforgettable Global Address at Keyano College last fall.  Underpinning this beautiful movie is the wind of the Great Spirit, whispers of the ancestors, and the love of family and tradition that flows absolutely counter to how an outsider might view this picture.  I found the authenticity and honesty of The Lesser Blessed to be incredibly moving, refreshing and starkly beautiful.  Bravo to Anita Doron, Richard Van Camp and all the souls, both here and gone, who helped shape this amazing story of self-discovery, forgiveness, love and life in a northern town.

I called Richard this morning to pass along my thanks and congratulations.  He is very excited for the film's future - last night's screening was only its seventh.

"I'll never forget sitting down to watch it for the first time on September 9th at the TIFF," he recalled. "I was thinking to myself that this is a dance of trust."

"Three minutes in, I knew we were sitting on a goldmine."

The Lesser Blessed will be screened in various locations across the country in May and June, with wider distribution to follow.

"A person has maybe but three chances in life to stare down the devil right in the eyeballs. This is your most important one." - Jed (Benjamin Bratt), The Lesser Blessed