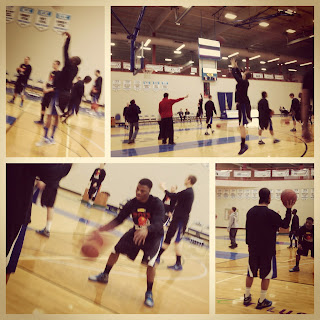 I was standing in line at Sunshine Cafe by Mitchell's, waiting to pay for my granola and nut snack that would sustain me through the gold medal game about to start between the Keyano College Huskies and the Red Deer College Kings, when I struck up a conversation with a couple of players from the Augustana Vikings.

They appeared to have enjoyed the tournament, our hospitality and the facility, but I really wanted to get their perspective on what had happened the day before.

"How significant was Keyano's win over Briercrest?" I asked.

I don't exactly remember how they answered the question with words, but their faces said it all.  It was huge, jaw-dropping, incredible.

I waxed eloquent for a few moments on the quality of the Briercrest players, including point guard Caleb Klassen whose speed and tenacity was a thing of beauty to watch.

"You're right," he said.  "But their point guard (Berhe) can't be trapped.  That proved itself out.  He's also calling the plays, setting things up.  He does a great job running the show."

I was waiting for Klassen to emerge from the dressing rooms after their bronze medal win over Lethbridge, as I wanted to acknowledge his effort.  It took awhile, but with three minutes left before the tip-off between Keyano and RDC I saw him standing in the lobby.  I dashed over, shook his hand, congratulated him on their bronze medal win, and said a few words of appreciation about his incredible hustle.  I also told him that I'd said a few positive things about him in my blog that morning.

Not going on to the Nationals despite working their tails off through the season to be ranked #1 in the country, Klassen was subdued, disappointed, and reasonably disheartened by the turn of events.  In truth, he probably wasn't interested in being praised and celebrated in the midst of trying to accept the fact their trip to the Nationals in Montreal had been inexplicably cancelled by a Huskies team who were firing on all cylinders.  He was understandably lifeless in his response, which was absolutely fine.  I wished him well, feeling good that I was able to pass along my appreciation and respect.

I was back in my seat, watching the first few minutes of action, when Klassen came bounding up to where Ben and I were sitting.

"And what is the name of your blog, I'd like to read it."

In just a short couple of minutes, this young man processed what I had initially said to him, how he had reacted, and resolved to make a proper connection.  He showed incredible character and left a completely different impression on me than what have might have otherwise been the case. 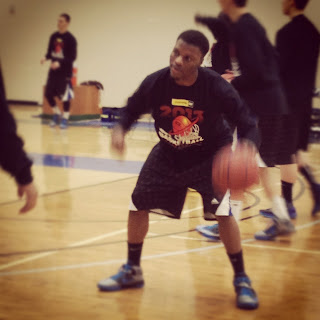 Earlier in the afternoon, I was similarly impressed with Serge Kongolo Khayipangi. I was on the sidelines taking a few photos with my iPhone when he same over to shake my hand.

That he even knew who I was impressed me.  That he specifically came over to make a connection, added to what had already been an extraordinary experience.

Our guys ended up falling a little short, losing the gold medal game by a scant three points.  Just a few seconds to go, we all thought we had pulled ahead.  Unfortunately, a foul came into play which sealed the golden deal for the RDC Kings.  Unlike the day before, when we just couldn't miss, hitting the basket seemed to be like climbing a mountain dragging a giant stone - it was damn hard work. 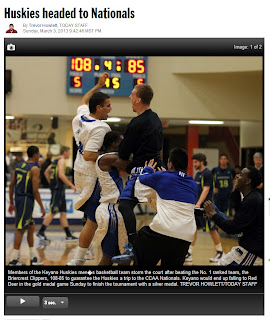 Despite the loss in the final, so much was achieved.  The stunning win over Briercrest solidified a trip to the Nationals in Quebec, March 14 - 16.  The home games attracted record numbers of fans for college basketball in Fort McMurray.  The product on the court was outstanding and bodes well for continued growth in interest for the sport.  And teams from all over the ACAC were treated to a first-class tournament and great hospitality. 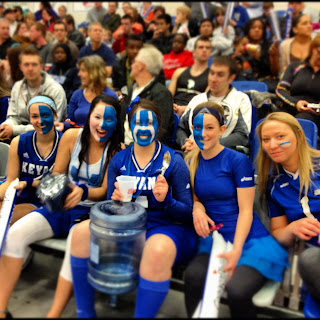