Drawing, exploring and finding an unexpected use for coffee

I have a stack of 10 drawings that were done on our holiday.  There was one more, a portrait of Vladimir Putin, that I managed to ruin.  After my epic fail with watercolour pencils, I now have a brutally bad portrait to hang on the wall and remind me that failure is OK -- once in awhile. 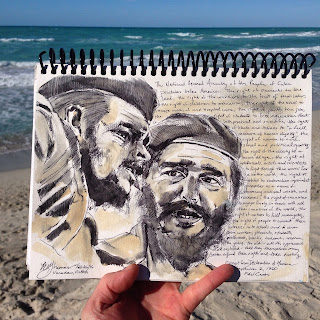 I focused on drawing using a set of 10 pencils for the first couple of days. Then, while doing a quick sketch of Che Guevara and Fidel Castro, an errant globule of coffee managed to land in the centre of the paper.  Rather than giving up, I used it as an excuse to try something new.  I used my fingertip as a brush and used the coffee to add texture and colour to the piece.

Fascinated, and somewhat inspired, by the story of the Cuban Revolution that I was reading, I added an excerpt from the Declaration of Havana from September 2, 1960.

Therefore, the National General Assembly of the People of Cuba proclaims before America:

The result was pretty cool, so I tried it a second, third, fourth and fifth time over the final few days of our vacation and during our long trip home. 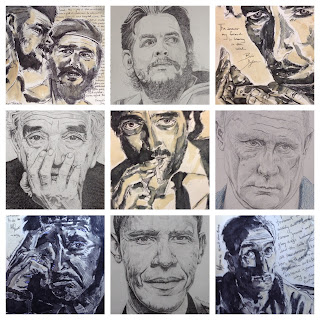 If there is one thing certain about this artistic adventure it is that I'm always learning.  Each new technique, whether a planned deviation or a happy accident, helps me improve my skills and take me into new directions.

Being away from the studio for a week always does a number on my confidence, despite the fact that I created art throughout our time in Cuba.  I decided to get back into the painting swing of things by doing a portrait of a modern artist named Balthus.  After having done an ink/pencil/coffee study on paper, it was nice to get him on the canvas.