I feel like I'm hyper tuned into the creative force that us.  Small things trigger moments of inspiration and inform my paintings in ways that are so difficult to explain. 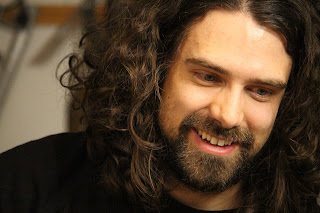 I was putting the finishing touches on Rosemary Hancock's portrait when Daniel Gillies popped into the studio for an interview.  You see, one of my side gigs is freelance writing for YMM Magazine, and my current assignment is to do a feature story on three local musicians who are doing some great things.  Rather than doing a series of questions at a sit down or over the telephone, I decided to something a little different.  Each artist was invited to Birdsong Studio, where they played, I painted and we talked.  Each influenced and informed the painting I was working on at the time. 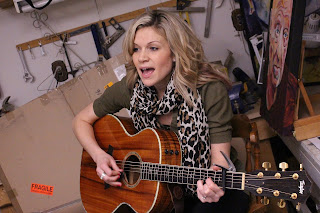 Shantelle Davidson help shape the final piece in that series, the portrait of Adam Wood, with her beautiful voice and heart. 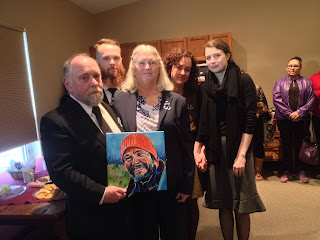 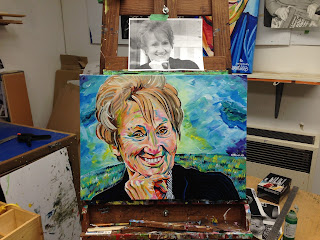 Responding to the conversation, his guitar and his voice, I started applying paint to the background.  A sky of blues, greens, and purples began to develop, along with shafts of light through the clouds.  I love where it went, as did the client, Rosemary's son Al.  When I shared with Daniel my appreciation of how he contributed to the painting, he wrote: "It's so interesting how the background of the portrait is blue/green.  I don't know if you've heard of how sounds/keys can give images to certain colours, but whenever I play in the key of D, I see the colour blue. And I was playing in D the whole time."

I always allow my process to take me where I need to go in terms of the subject of the painting.  The background is seldom pre-determined and often elusive.  I've learned to follow my instincts in the moment.  Like Daniel said, colours will pop into my head.  My job is to get them on the canvas and see what happens.  Blue was the first colour that spoke to me on Thursday night as we spent an hour together talking about his music career and his love of family.

Sometimes inspiration strikes in mere milliseconds.  One glance at an Eric Staub painting can influence one of my animal portraits.  Looking at the bright palette of Dominic Mattiolli will infuse its way into my approach with a celebrity portrait.  Patrick Fischer, another superb artist doing similar work to mine, influenced me yesterday by sharing a 15 second time-lapse video.

Up to that point, I did not know that my iPhone had the option to do time-lapse.  Suddenly, inspiration balloons were popping up all around me and I know I had to give it a try to start my day.  I ended up choosing Mark Twain as my subject.  I set out to do a quick portrait, limiting myself to a short amount of time, and recording the whole thing.  I did that two more times yesterday and the results were pretty extraordinary.  Check it out.

I'm grateful to all the influencers who unknowingly become part of my art.  Thank you all.
Email Post