My sons, turning into men

Dylan seems to tower over me.  He has followed in the footsteps of his grandfather on his mother's side; Joe is equally tall.  Ben is quickly catching up and about to go through that massive growth spurt that happens when boys hit their teenage years. 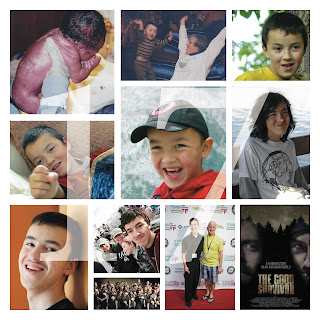 I took Dylan out for lunch yesterday - it was his 17th birthday - and realized, at a gut level, that he is just a year and a bit away from leaving the nest.  He is going to dive into the big and wonderful world reducing our household population to three.  I'm not going to lie; that thought is as unsettling as it is exciting.  Dylan will do amazing things in his life. 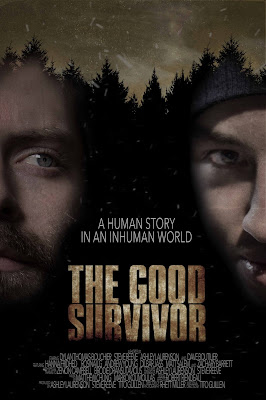 We are going to witness one of those things on Thursday night when we watch The Good Survivor for the first time.  It will be screened as part of Keyano Theatre's TIFF presentation of the film Grandma, starring Lily Tomlin.

Dylan has faced many challenges in his life, fallen down and picked himself up more times than any of us can appreciate.  He has been open with his struggles with depression, of being a person with a disability, and about being different.  Admired by many for his tenacity, courage and generous spirit, Dylan is still working hard on his personal "stuff" and moving forward every single day.  We are grateful to have in our lives.  I was grateful to spend quality time with him on his birthday. 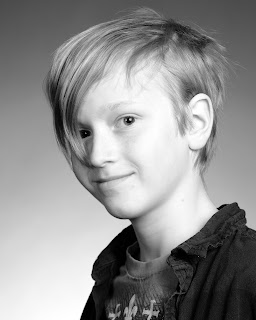 Ben has been away for a week with Heather, visiting his grandparents down in the Crowsnest Pass.  They took him skiing at the resorts at both Castle and Fernie.  It felt weird not having him here for that long.  Even though he spends a lot of time at his computer, I sense his presence, and felt it deeply when his room was empty.

He had been home for a few minutes when he popped into my study to show me the drawings he has been doing.  Completely self-directed, he has been working on his portrait skills for months.  The collection of random faces that he did on this trip - several done in the car - is amazing.  While I admire his skill, I am in awe at his commitment.  He gets something in his head and quietly keeps at it.  I would share an image or two, but I'm going to honour the fact that he will post them when he is comfortable doing so.  But they are incredible, trust me.

Ben has been working on his guitar skills since the New Year began.  He has a chart taped to his wall, his lesson plan, and sticks to it religiously.  Using an online program of some kind, he is getting better and better every day. 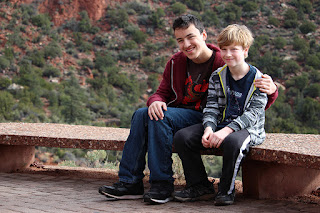 I see bits and pieces of me in both Dylan and Ben, different bits and pieces but distinguishable traits, attitudes and habits.  I see a lot of Heather, too.  Her spirit, wisdom and warmth is imbued in both.   The important realization though is that they are both turning into independent, singular, and substantial men.  They are uniquely deep feeling, empathetic,  thoughtful and highly intelligent.

When I think of all the feelings I have for my sons - love, pride, and hope - the words of Rudyard Kipling bubble to the surface.

If you can keep your head when all about you
Are losing theirs and blaming it on you,
If you can trust yourself when all men doubt you,
But make allowance for their doubting too;
If you can wait and not be tired by waiting,
Or being lied about, don’t deal in lies,
Or being hated, don’t give way to hating,
And yet don’t look too good, nor talk too wise:

If you can dream—and not make dreams your master;
If you can think—and not make thoughts your aim;
If you can meet with Triumph and Disaster
And treat those two impostors just the same;
If you can bear to hear the truth you’ve spoken
Twisted by knaves to make a trap for fools,
Or watch the things you gave your life to, broken,
And stoop and build ’em up with worn-out tools:

If you can make one heap of all your winnings
And risk it on one turn of pitch-and-toss,
And lose, and start again at your beginnings
And never breathe a word about your loss;
If you can force your heart and nerve and sinew
To serve your turn long after they are gone,
And so hold on when there is nothing in you
Except the Will which says to them: ‘Hold on!’

If you can talk with crowds and keep your virtue,
Or walk with Kings—nor lose the common touch,
If neither foes nor loving friends can hurt you,
If all men count with you, but none too much;
If you can fill the unforgiving minute
With sixty seconds’ worth of distance run,
Yours is the Earth and everything that’s in it,
And—which is more—you’ll be a Man, my son!