Praise for the storytellers

If you've lived in Fort McMurray for 5 years or more, you've seen a lot of change.  If you've lived here for several decades, like Heather and I, you've seen even more change.  Imagine having spent the better part of your adult life here and being able to recall a time when you knew everyone in town.  That kind of change is hard to wrap your brain around. 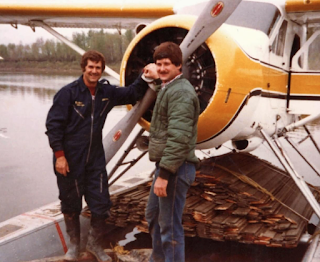 Blair Jean spent over 40 years in the region and riding the rails between a traditional lifestyle (trapping, hunting, fishing) and working with industry.  He launched Clearwater Memoirs at a book signing event at the Wood Buffalo Regional Library last night.  It was a small but appreciative crowd that listened to me read small excerpts from the book after which Blair added some extra colour.

The history that he has captured, and the history that he is working on capturing in several publications in development, is at risk of being lost to history.....at least it was, before Blair began his retirement projects.

Many people who have settled in Fort McMurray in 2016 have little to no idea about the historical richness of this place, the roles that the rivers played in our development, and myriad wrinkles of our history that are decidedly fascinating.  Grabbing a copy of Blair's book, or some of the others that have come before, would be a great starting point to understanding how we got here, and the way of life that came before.

"If I could flip a switch and change it back to the way it was in the 1960s, I would do it," said Blair,  not from a place of bemoaning progress, but from a place of reverence and love for the way things were before. 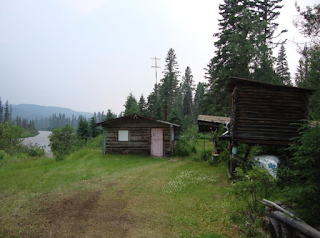 My old friends have passed.
But they are not forgotten
I stop to reminisce.
And still, I heart their voices.

No smoke from the chimney.
No ring of the axe.
No roar of a float plane.
And still, I hear their voices.

No canoe on the landing.
No moose hide stretched.
No fur in the cache.
And still, I hear their voices.

Their time has passed.
The river still flows.
But, at Big-Eddy,
I still hear their voices.

Clearwater Memoirs is available at a number of different places in town including Heritage Park, the Gift Shop at the hospital, and Oil Sands Discovery Centre to name a few.  You can follow Blair's writing adventures on Facebook by clicking here.
Email Post