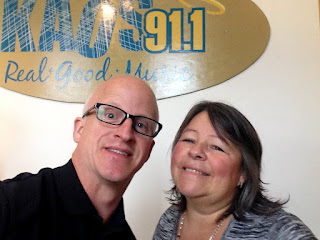 As I listened back to the IMPACT interview with Sherry Duncan from Tuesday, I couldn't help but admire her ability to tell a great story.  There were two that really jumped out for me.

First, she talked about the impact she had in the life of a young man who was having a hard time finding his confidence in school.  Things had not been easy for this young fellow and he felt that he was on a dead end road to nowhere.

"You have what it takes; you have the power," she said to him, sitting on a picnic table sharing an ice cream together.  "You are the one who owns your destiny."

As he and his family moved from the community, Sherry told the young man that she would like to come back to see him graduate from high school.

Years passed and she lost touch with this fellow. One day, out of the blue Sherry got a message from the young man.

"I don't know if you remember me," he wrote.

"Of course I remember you," Sherry wrote back.

"So I'm graduating, can you come?"

(It was at this point that I almost started to cry)

Sherry desperately wanted to go, but one of her own children was graduating on that very same day.  Instead, she promised the young man that she would come to his university convocation.

"When you graduate from university, I'll be there" she said.

He said,"I'm never going to make it to university."

"Well, what do you need to do?" she replied, as they began talking about a plan.

He just finished his fourth year of university and he's going on to be a physiotherapist.

(I almost cried here, too)

Near the end of the on-air visit I asked Sherry if there was a moment of kindness that stands out for her from the fire and evacuation.

She shared an unlikely anecdote of being stuck in the line-up of cars and trucks trying to flee Fort McMurray and needed to relieve herself.  Being a person who suffers from paruresis, I can't imagine trying to pee on the side of a highway with vehicles in every direction.

"A random stranger  move his truck to be aligned with my car and open his door, so I could be between two vehicles and have a tiny bit of privacy," she shared.  "That's heroism."

"In that moment, allowing me some dignity, that was a kindness that I'll never forget." 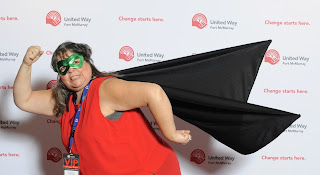 I appreciate Sherry so much and am grateful for her presence in this community and in my life.