I finished the first part of my work day - my United Way stuff - and found myself replete of energy.  Even after having a late afternoon nap, I felt like all I wanted to do was find my spot on the sofa and vegetate for the rest of the evening. Instead, I decided to walk to the grocery store to pick up a few things; I prefer shopping for a small amount every day, rather than a large amount every week.  I cooked dinner, cleaned up the kitchen and called the boys to eat.

I felt better having moved my body around a little and going for a walk, but I was still exhausted.  Rather than acquiesce to the tiredness, I encouraged myself to "step forward".  As long as I took a few steps in a forward direction, I will have honoured my intention to keep going. 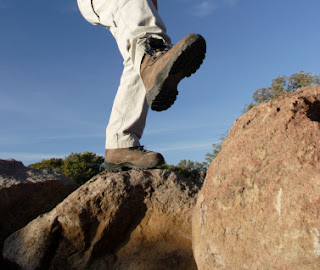 Oftentimes, the work I need to do on the computer piles up, as it had by late yesterday afternoon.  So, instead of going straight out the studio, which is always my inclination, I took care of some correspondence and a number of other tasks that needed to be done.  By the time Heather got home at 7 pm, I was still tired and ready to step back and do nothing.

However, I continued to step forward.

"I won't be out there long," I said, referencing my inevitable trip out to the backyard studio.  "I just want to do a few things before calling it a night."

I cleaned up from my workshop the night before in Anzac, touched up my painting of Audrey Hepburn, and worked on the background on my portrait of Gene Wilder.  It felt good to clean up the space, and do a small bit of painting.

"It is the small things, done consistently, that make the biggest difference," said Robin Sharma.

The little thing that I do every single day is step forward; sometimes it's a giant leap, other times it is small manageable steps.  However, I'm further ahead today than I was yesterday, and I know for certain that I will be even further ahead tomorrow.