The changing value of things...

I have this super strong memory from about 1983 or 1984 when my brother bought the movie Raiders of the Lost Ark on VHS tape.  He paid (in my memory) $99 for it.  Putting that in today's dollars it would be about $231.  Imagine!  That same VHS tape is probably in a giveaway bin right now, struggling to find a home.

As the world moved from LPs to CDs, vinyl could be grabbed for pennies on the dollar and many of us paid through the nose to replace our favourite albums in the new format.  For the longest times, compact discs retailed for $19.99 or more.  And while they can still be purchased, often as POS (Point Of Sale) items at your neighbourhood gas station, they have been largely supplanted by digital downloads.

As we went from being paupers in university to earning our first incomes, we became collectors.  Somehow the accumulation of books, music and other things was our way of growing up and, to some degree, defining ourselves.  Thirty year later, we are drowning in the things. 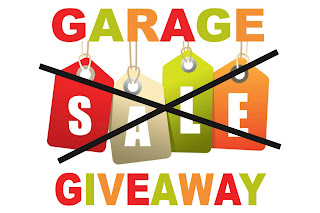 We decided to begin the decluttering process early - I am still 15 years away from retirement - and instead of trying to monetize the valuables to which we no longer maintain attachments, we held a driveway giveaway. 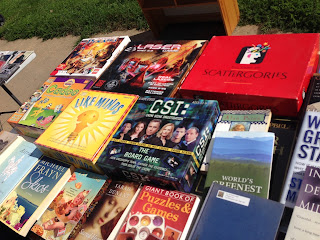 Books, CD's, DVD's, games and clothes, new and used, were set out on tables where my Ford Escape normally rests.  We posted it on Facebook in a few places and put up a big FREE sign.  It was fascinating to see what happened. 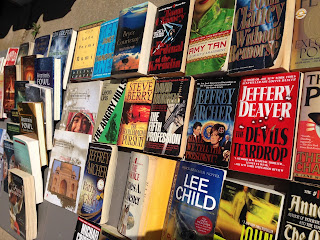 By the end of the day, hundreds of books had been picked up, and only a handful of CD's.  The games and the kitchen things (plates, utensils, etc.) were scooped up almost immediately.  The music that people would have salivated over a decade ago, now holds little to no value.  Fascinating.

We are going to set up our giveaway tables again today.  I suspect we'll keep adding things to it as the day goes along.  So, feel free to drop by.  We are at 114 Demers Drive. 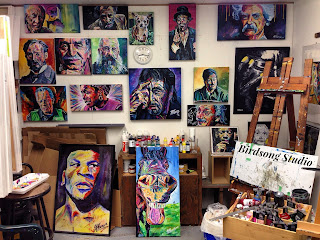 If you've been looking for an excuse to visit Birdsong Studio, this could be it.  There are several projects in progress and lots of finished works on display.  I'll be painting all day.  Just come right around to the backyard.  Don't be shy.  You can even join our esteemed PM and get your #selfiewithelsie. 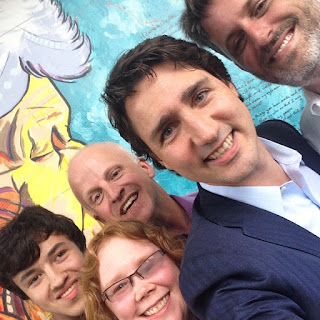 If you're an audiophile, particularly a Jazz fan, come by and check out the music collection.  You never know, there could be some treasures that will bring a smile to your face.  Everything is free, so you can't lose.