Candidate out the gate 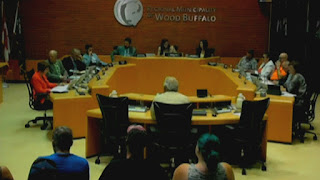 While one candidate declared his intentions to run for council on my radio show back in 2016, another has made his pronouncement a little more public in the Fort McMurray Today.  Jeff Peddle is a local business owner who is very concerned about the economy, prudent spending, and long-term planning.  He is the first of what will probably be many people who will toss their name on the ballot this fall during Alberta's municipal elections.

This was the first four-year term for Alberta municipal councils; previously terms were three years. It's been a long four years in Fort McMurray and a tough ride for our current elected officials, both professionally and personally.  Some are ready to return to private life, others are on the fence about considering another run, and a few may take a shot at the mayor's chair.

I don't follow municipal politics closely like I once did.  I observe from the fringes, catching snippets of information from the media, Twitter and personal conversations.  I haven't watched or attended a council meeting in a very long time.  However, having run and served, there are a few small things that I can pass along to people considering a run.

Know what you're running for

It is not town council or city council; it is Municipal Council.  It's a small thing but a big thing.  We are a specialized municipality in the province of Alberta; Fort McMurray is an urban centre located within that jurisdiction.  If you are successful, you will be serving the whole region, one of the largest (by area) in North America, not just Fort McMurray or the hamlet in which you live.

When you come out of the gate with fresh ideas, innovative approaches to government and examples of what you will do differently, do your best to look back at the last 4 to 10 years to see what was done before.  Talk to current politicians about the issues, get their insights on what happened and why.  Talk to former politicians, too.  Generally speaking, people who have served are interested and willing to do a knowledge transfer, at least of the stuff that is in the public realm.

Know what you're signing up for.  In other words, get a deep understanding of the work and effort required to be a successful elected official.  Don't make the mistake of thinking that serving is all glitz, glamour and grins.  You'll be shocked to discover that it requires a lot of reading, meetings, public appearances and various other things.  It can and does take a toll on marriages and families.  Understanding the sacrifice required at the outset is far better than getting surprised after a few months of sitting around the horse shoe (Council Chambers).

There is no greater calling

At its core, running for an elected position is about service to others.  In that sense, there is a no greater calling.  If you go into it with the intention of service, no matter what happens, you'll come out the other end feeling good about your efforts.  If you go in with other intentions, self-serving or otherwise, you will run into a heap of troubles.  The public has a way of sniffing out the difference.

I enjoyed my brief three-year stint on council and the people I was able to serve with.  I loved working with the municipal staff and doing my best to help citizens with a variety of real-life issues.  In the process of working 20 to 30 hours a week doing council duties, I learned a lot about government, the complexities of running a municipality of this size and the weight of having one of 11 votes on decisions that were massive.  It is an experience that I will always treasure.

If you're thinking of running and you understand the scope of what you're running for, then I would whole heartedly encourage you to step forward and put your name on the ballot.