Time for another overhaul?

Every morning, I go to work at the same time that my older son needs to catch the 7:15 bus at the main terminal downtown.  This gets me to the office early and saves him some wear and tear on his body, not having to walk the four blocks to the terminal.  And every morning we sit in the car and watch for one of the two buses that gets him up to Westwood Community High School, the routes 2 and 16.  For the past month, the time of their arrival has been different every day.  In fact, between one day this week and the next, there was a 20 minute difference.  There was a time when the arrival of the bus could be counted on like clockwork.  That predictability was the bedrock of our morning routine.  It no longer exists.

The response to my tweet from the RMWB was to phone the call centre, which I had already done.

The call centre person said she would pass along my concerns and questions to an inspector and that they would call me directly.  They have not.

I tagged 5 of the 6 Ward One councillors who are on Facebook hoping for a response of some kind.  There has been total silence so far.  In fairness, yesterday was a council meeting day, which means they were super busy.  Conceivably, they may respond in the next few days, or they may not.

Citizens.  People with heart-wrenching stories of children waiting for a bus that didn't arrive in -40 weather and coming home in tears.  There were stories of retail workers who rely on the transit system to get them to work on time, not being able to do so because of buses that arrived late, or didn't arrive at all.  Heated bus shelters that are less than effective, a new schedule that limits access to certain neighbours later in the evening and on weekends, and myriad issues seem to have done  damage to the community's level of trust in using transit.

Bus drivers.  These hard working men and women care deeply about their profession and their role in the community.  One of them reached out to me in confidence to share their level of frustration and desperation.  "We need help," this person said.  "We can't say anything, because it would put our jobs at risk."

As this person talked, they moved to potential solutions to the schedule and service nightmare that has become municipal transit, their voice filled with passion and care for citizens.

Do most of us use transit?  I'm guessing not.  The vast majority of us own vehicles and drive from place to place.  But we need to think about our fellow citizens who have no other choice than to wait hopefully at their neighbourhood bus stop, braced against the wind and cold, waiting for their ride.  Imagine how you would feel having to do that every day, not knowing with certainty that it will arrive on time, or arrive at all.  Imagine the stress it would generate.  Imagine how chilled to the bone you would be waiting on one of our -40 days for 10, 15 or 20 minutes. 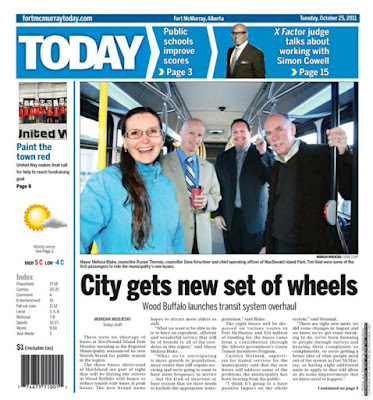 There was a time when the transit system was running better.  Some say before the fire things were pretty good.  The bus driver who shared their insights said things were at their best back in 2012. Many agree that things have gotten much worse since the schedule changes that came into effect in December.

I promised to write a blog post to raise awareness and hopefully get the attention of senior managers at the municipality and our elected officials.  It is not the fault of the politicians, but it is ultimately their responsibility to set the direction for change.  The service standard of our municipal transit system is faulty at best, possibly broken.

Meanwhile, I will see if I get a call back from a transit inspector today.  I think it's fair to give them 24 to 48 hours to respond with a phone call.  If they don't, I will be making a few well placed phone calls to ask why not.  I also hope some of our councillors respond.  We have citizens and children at risk, both from a health and safety perspective, and from an education and employment perspective.  If people can't get to school or work on time, it's a problem.  Based on what I'm hearing, more than several people have been told their jobs are on the line because they are arriving late for work.