Guided tour of Bangkok at night We had one of those full days that requires some reflection time to process. After a night of deep sleep, I feel especially foggy.  Whether back home in the snow or here in Thailand, my body still likes to get up at 6 am. There is no vacation mode with this bag of bones. We were so tired last night after our adventures that the handwriting that always precedes the blogging is happening the following day. I couldn’t even pick up a pen last night. Our day started even earlier yesterday (Tuesday).  Heather wanted to participate in providing food to the monks.  They live their Buddhist life following 227 rules, one of which is that they cannot prepare their own food. There is too much temptation involved, as we experience every day.  Instead, they rely on the people of the neighbourhood to provided their twice daily sustenance. We took the BRT (Bangkok Rapid Transit) then the BTS (Sky Train) to the Bangkok Art and Culture Centre in the morning. This 9 level celebration of Thai art and culture is completely free and features a mix of stores, artists, and a large public gallery. The main focus of the exhibition was former King Bhumibol Adulyadij (Rama IX).  On the main floor were submissions to an artist call to depict the achievements of this beloved monarch. He died just over a year ago.  While images of his son, the new King, are everywhere, the portraits of the old King remain, displayed in places of honour and memory in home, businesses and public spaces. 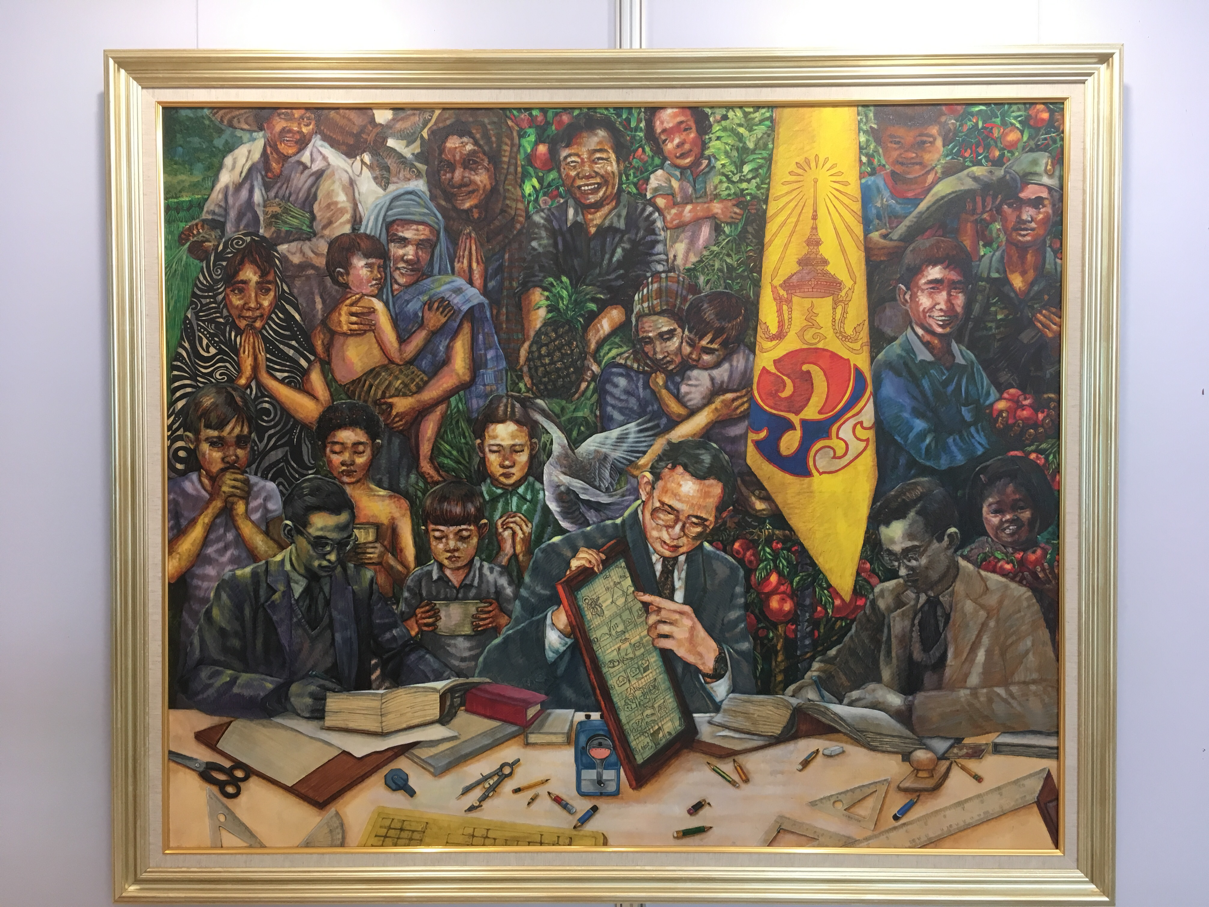 The top floors of the arts centre featured his view of the world through the lens of a camera - the King was an avid photographer. It was fascinating to see the love he had for his wife, family, people and country through his images. He was deeply human and could express that truth beautifully through composition, colour and story. We grabbed some lunch at the arts centre before making our way back to have a midday rest. Lots of activity slows down and even stops during the heat of the day between  2 pm - 3 pm. Our guide for Bangkok in the evening tour met us at Wutthakat BTS Station along with three other people: a young Chinese couple from Toronto and Sheldon, a landscape architect from Bristol, England.
We were taken to a small river boat, then taken to a nearby temple where we learned more about Buddhism and the life of a temple. We learned that there is a big difference between a city temple and a forest temple. Because the city temples need to serve so many people, they are grand in their design.  In fact, they need to attract customers and supporters to survive and thrive. The taller, more ornate, and to some degree, more novel, the more worshippers they will attract. Inside the relatively new pagoda at this temple are hundreds of precious artifacts, donations, and Buddha statues. While there are similarities to all the expressions of Buddha, there are many variations in the details of the face: the shape of the nose, the structure of the facial bones, etc.  Everything was interesting, but the feature room of the pagoda was stunning. 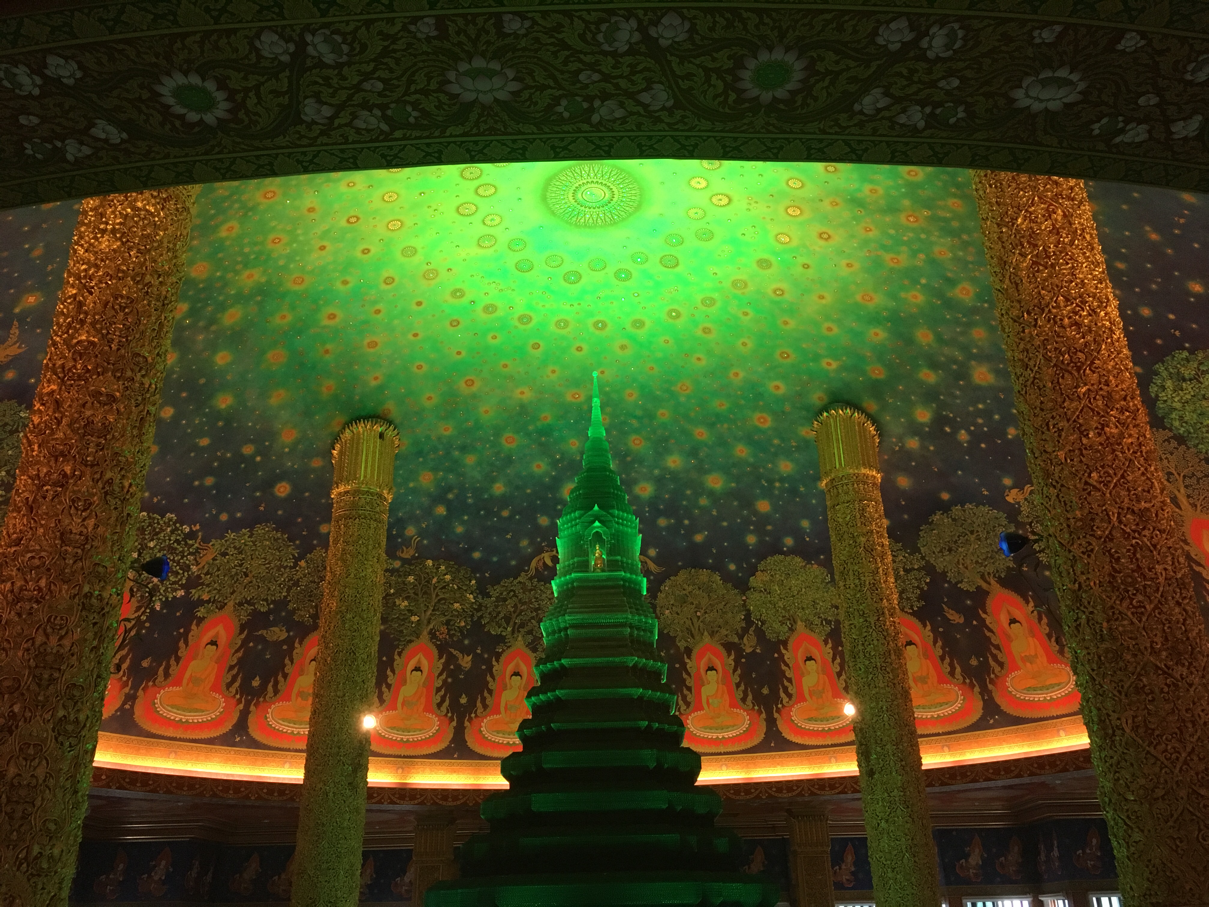 It felt like we were in another world.  There was also a 360-degree view of the city from up there. 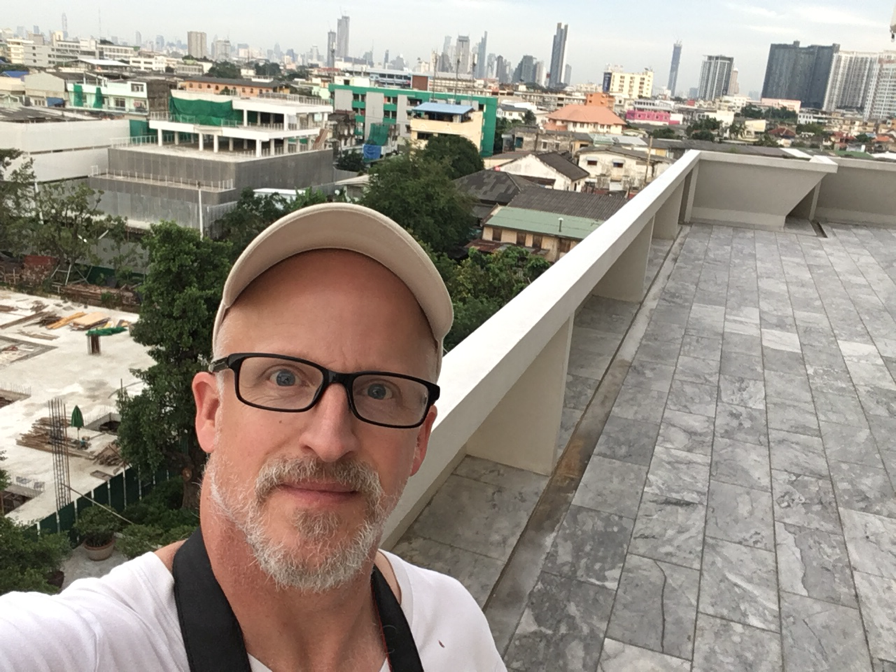 Another boat trip over to the big river (Chao Phrayo), a ferry boat crossing and all of a sudden we were in an amazing market district. Our guide took us to where we were able to enjoy “the best mango in Thailand”.  He wasn’t kidding.  The mango and the sauce with sticky rice that came with it made for a beautiful combination. At a dessert vendor, we had another goodie that was equally wonderful. 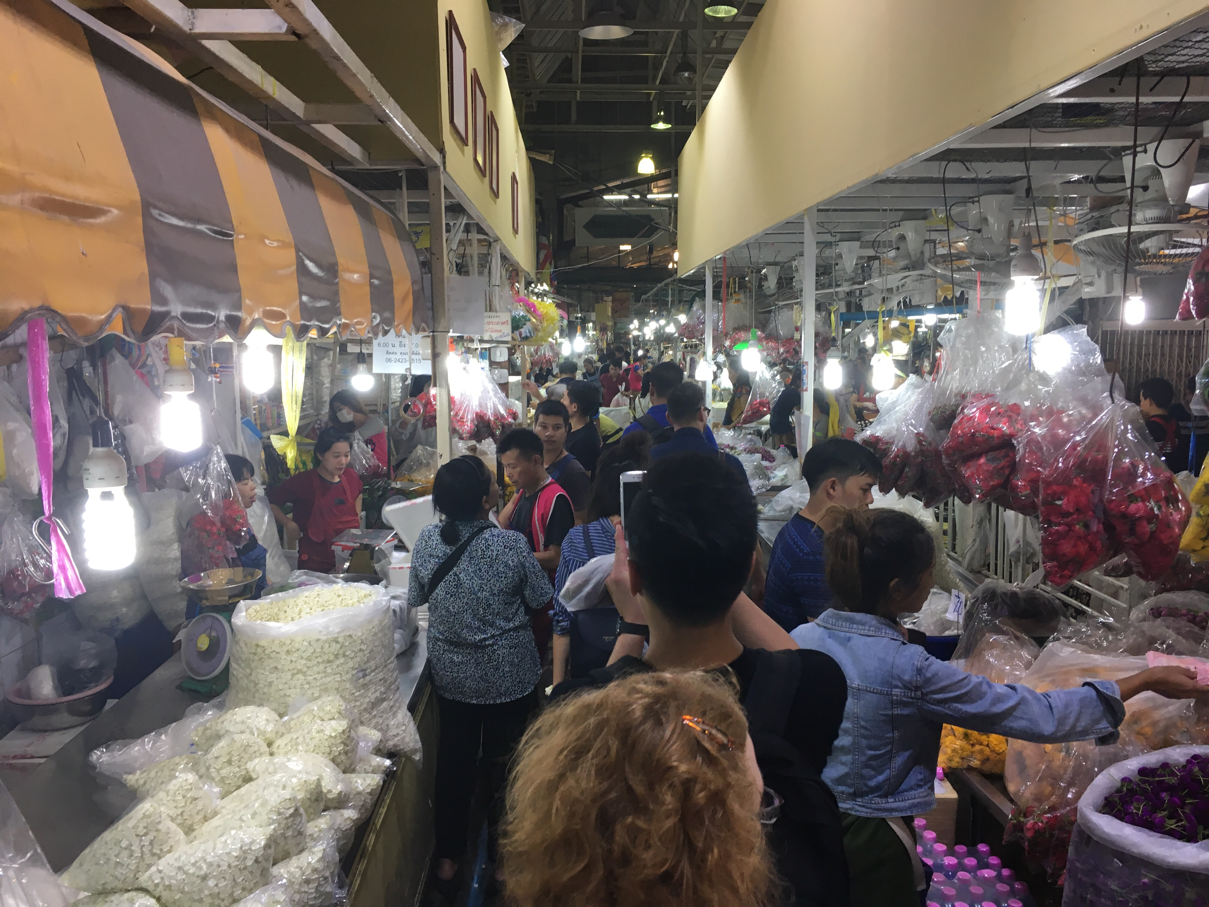 We went through a 24-hour flower market and Heather both received a flower garland and create a flower offering for our upcoming visit to Wat Pho.  We then enjoyed a much anticipated and authentic meal of Pad Thai made by a talented street vendor. Having a local point out the best foods and vendors was so awesome. Up to that point we had been somewhat fearful of trying the street food. The items we had last night were spectacular. 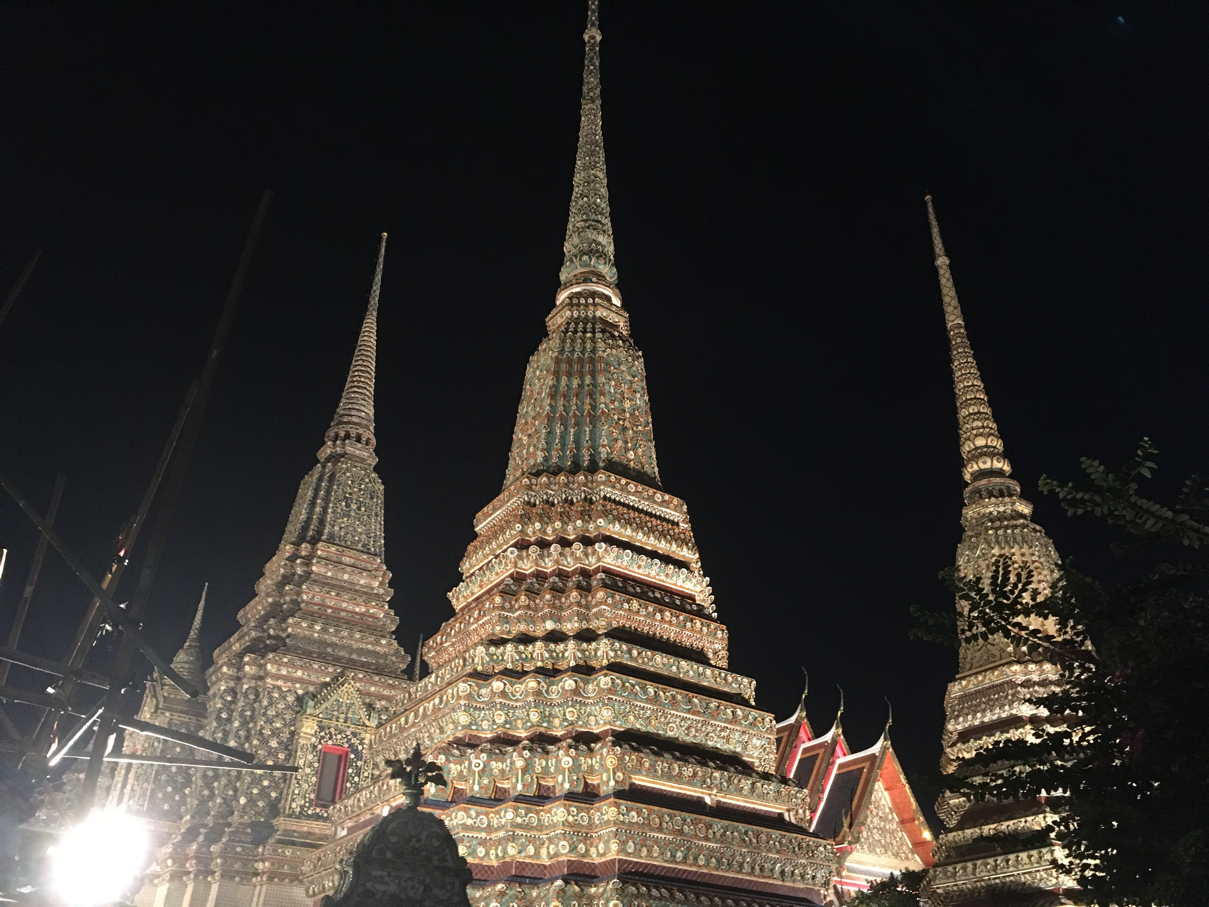 Wat Pho at night was our final destination. One of the most popular temples in Bangkok, it is teeming with thousands during the day. We had a much different experience at night, being practically the only people there. One of the highlights of the day for me was the trip along the canal in Thon Buri. Houses lined the water, from a time when this was the main road. Some still receive mail from a postal service boat that delivers every day. Some houses are obviously owned by people of wealth.  Others suggest that they have been in families for generations and that money is not plentiful.
“Look at that light,” suggested our host. “Someone is still living there.”
We saw several places where habitation just didn’t make sense. One stands out to me where the floor appeared to be sitting on a 30-degree angle with one end of the house well below the water line. Yet, the light was on, with a TV blasting out a show. Many families, and apparently lots of seniors, are living out their lives as their generational homes crumble around them.
The quirks and patterns of a place seem more familiar and familiar and normal the longer we are here.  Myriad food stands, stray dogs splayed out at the entrance of 7-11, and random encounters with monks are normal now. But Bangkok is the City of Angels and surprises. We had white squirrel come and visit yesterday. We also floated by a river monitor while out on the canal, a rare treat according to our guide.
Two more days remain in Bangkok before we transition to Siem Reap and the house building portion of our journey.
Email Post